The Chronicles of Deltovia (The Very Genius Notebooks #1) (Paperback) 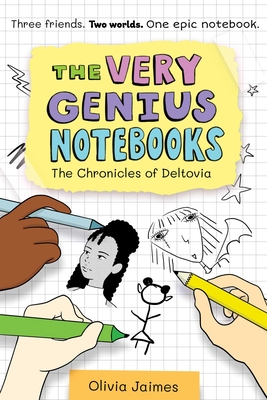 Three friends. Two worlds. One epic notebook. Escape into The Chronicles of Deltovia, the greatest story still being written!

Three middle school girls—Misha, June, and Ollie—know their epic fantasy story could be the next Lord of the Rings or Game of Thrones. The only holdup is they have to write it first. But that’s a trifling concern: they’ve bought a $1.99 composition notebook, and they’re going to pass it back and forth over the course of their 7th grade school year to build the world and characters as a team.

Together they invent and explore the mysterious land of Deltovia, while also writing about what’s going on in their actual middle school lives in the notebook, too. The book's unique format presents each of their daily entries, book chapters, notes, plans, and imaginative world-building, giving readers a firsthand look at the creative process and the fantastical new realm of Deltovia.

This thrilling and irreverent new illustrated novel series about three middle school girls' quest for literary greatness is written and illustrated by Olivia Jaimes, whose fresh reboot of the comic strip Nancy earned praise from The New York Times, Rolling Stone, The Washington Post, The AV Club, Slate, and readers across the Internet.

The Chronicles of Deltovia is the first book in her new series, The Very Genius Notebooks, which combines imagination and real-world drama, and delightfully mixes scenes of friendship, fantasy, and middle-grade illustrated novel fun.

Olivia Jaimes' run as the official Nancy cartoonist started in 2018 and quickly became a phenomenon. The first woman to write and illustrate the classic comic strip, she brought a fresh, irreverent vision to the comics page, delighting fans of all ages. Her work has earned praise from the New York Times, the Washington Post, NPR, Rolling Stone, Smithsonian magazine, Vice, the AV Club, Slate, Vulture, and readers all across the internet. She has also received recognition from the Ringo Awards, and been named best new comic strip by The Ringer, Tech Crunch, and Hollywood Reporter.

"Misha predicts that the masterpiece she and her best friends have begun creating will lead to fame and fortune.

The young collaborators share a notebook (square-ruled and occasionally eraser-smudged) in which their illustrated novel takes shape interspersed with Misha’s journal-like account of middle school moments. The three heroes of their work, The Chronicles of Deltovia, are very like their creators. Misha, a bit impulsive, relies on her feelings much of the time and longs to be seen as complex, brave, sad, and deep (and famous in the future). June (the most sophisticated artist of the three) is focused, detail-oriented, and needs to understand the world logically. Athletic Ollie plays an untroubled cheerleading role, her infrequent additions to the work in progress amusingly detached. While the fantasy tale they create proceeds by fits and starts, propelled by Misha and clarified by June, the trio navigate the school year, participate in an overnight field trip at the science museum, and uncover, somewhat accidentally, the ongoing embezzlement of school funds. Misha’s, June’s, and Ollie’s voices are pitch-perfect and very funny, combining sincerity with fledgling self-awareness and accompanied by hilarious cartoon art in three distinct styles. The result is a warmhearted look at friendship and the pleasures and pitfalls of collaboration, literary and otherwise. Misha and Ollie read White; June appears Black.
Amusing and insightful." (Kirkus Reviews)