Why Didn’t You Just Do What You Were Told?: Essays (Hardcover) 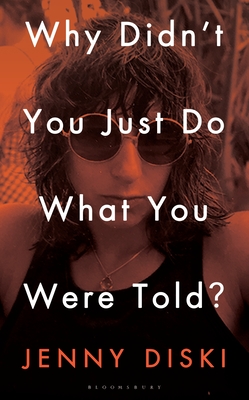 A collection of the best of the indomitable Jenny Diski's essays, "one of the great anomalies of contemporary literature" (The New York Times Magazine), selected by London Review of Books editor Mary-Kay Wilmers.

"She expanded notions about what nonfiction, as an art form, could do and could be." --New Yorker

Jenny Diski was a fearless writer, for whom no subject was too difficult, even her own cancer diagnosis. Her columns in the London Review of Books--selected here by her editor and friend Mary-Kay Wilmers, on subjects as various as death, motherhood, sexual politics and the joys of solitude--have been described as "virtuoso performances," and "small masterpieces."

From Highgate Cemetery to the interior of a psychiatric hospital, from Tottenham Court Road to the icebergs of Antarctica, Why Didn't You Just Do What You Were Told? is a collective interrogation of the universal experience from a very particular psyche: original, opinionated--and mordantly funny.

Jenny Diski was born in 1947 in London, where she lived most of her life. She was the author of ten novels, four books of travel and memoir, including Stranger on a Train and Skating to Antarctica, two volumes of essays and a collection of short stories. Her journalism appeared in publications including the Mail on Sunday, the Observer and the London Review of Books, to which she contributed more than two hundred articles over twenty-five years.

“[Diski’s] reviews and essays admitted doubt. They were marvelously shrewd but approachable and witty. Diski’s articles made the sound of someone chewing her fingernails very intelligently.” - Dwight Garner, New York Times Editors’ Choice

“Bask in the plenitude of Jenny Diski’s mind with this posthumous collection of short essays on everything from Jeffrey Dahmer to SCRATCHY WOOLEN VESTS? An injection of grade-A intellectual adrenaline!” - Molly Young, Vulture

“With the posthumous publication of Why Didn’t You Just Do What You Were Told? . . . . [Diski’s] reputation as an original, witty and cant-free thinker on the way we live now should be given a significant boost. Her prose is elegant and amused, as if to counter her native melancholia.” - Daphne Merkin, The New York Times Book Review

“Everything in her delicious essays is filtered, unabashedly, through her particularly sharp, uncompromising consciousness.” - Claire Messud, Harper's

“What a magnificent collection of writings Diski left . . . If you love a good essay, don’t miss this one.” - Alma

“Funny, heartbreaking, insightful and wise . . . A tonic for the soul.” - Emilia Clarke

“Jenny Diski’s [criticism] is likely to stand the test of time… it offers readers a bracing mix of razor-sharp analysis and wrenchingly honest autobiography.” - Associated Press

“The pleasure of reading Diski’s essays, whatever their subject . . . is in spending time with her persona—opinionated, funny, and endlessly curious.” - Ploughshares

“Effortlessly readable . . . shows [Diski] at her best. . . . Diski’s works are varied and surprising, and she puts a fresh spin on the personal essay with her bracing, singular prose, never veering into self-indulgence. . . . To miss these essays would be a shame.” - Publishers Weekly, starred review, "Most Anticipated Books of Spring 2021"

“Diski’s voice is sharp, wry, and entirely her own . . . Within a single sentence, she can exude both a seemingly effortless elegance and a fearless iconoclasm. For writers and readers alike, this new volume is a tremendous gift.” - Kirkus Reviews, starred review

“A singular voice in modern letters, flinty, unsentimental, and ruthlessly honest but with a mordant sense of humor . . . Diski was like no other writer. She was fearless, as is evident in this peerless collection. With an afterword by her daughter, Chloe Diski, this is a must for Diski admirers and all essay lovers.” - Booklist, starred review

“The force of Jenny Diski's personality, and the penetration of her mind, are as vivid as anything in contemporary journalism.” - Guardian

“Nothing about Jenny Diski is conventional. Diski does not do linear, or normal, or boring . . . Highly intelligent, furiously funny." - Sunday Times

“Diski is an absorbing, savagely witty, insatiably curious, and gifted writer... Her intelligent essays on wide-ranging topics will leave readers wondering why they have not been aware of her... a splendid introduction to her nonfiction.” - New York Journal of Books

“Diski’s work is phenomenal, a master class in not just substance and style, but in the human matters of vulnerability and self-exploration. Perceptive and humorous, often darkly so, Diski’s writing begs to be read, thoughtfully chewed upon, and revisited as we each work our way through the beautiful and bewildering chaos we call life.” - The Nerd Daily

“These selected works showcase the late author’s wit, insight, and never-boring exploration of how she fit into everything.” - Washington Independent Review of Books

“The arrival of Why Didn’t You Just Do What You Were Told?, a posthumous, just-released collection of her essays, offers a fresh look at a writer whose Jewishness matters from front to back, from first line to last. The essays prove it’s possible for a writerly voice to be both utterly sui generis and yet recognizably Jewish.” - Moment

“Opening with a lighthearted account of a breakup and concluding with a humble meditation on her cancer diagnosis, the book synopsizes the inertia of life. . . . When her mentor Doris Lessing suggests that she simply write about her childhood, Diski states: ‘I was enough of a writer to know that writing the story of my interesting childhood was not being a writer.’ Why Didn’t You Just Do What You Were Told? proves that Jenny Diski knew how to name things.” - ZYZZYVA

“Her writing will forever remain young, funny and rebellious.” - Observer

“One of the most electrifying memoirists of her generation . . . A superb volume of autobiographical fragments.” - Daily Telegraph

“The late writer’s singular qualities shine through in these brilliant columns for the London Review of Books . . . She is the most undeceived of writers--and surprising.” - Kate Kellaway, Observer

“A superb collection . . . lit up by shafts of delightful comedy.” - Irish Times