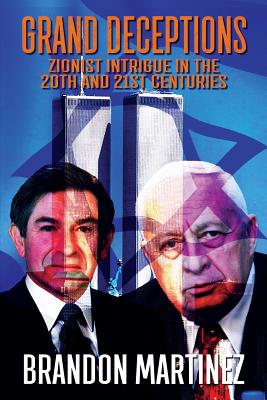 By Brandon Martinez
$14.99
Not currently on the shelf, but we can order it, to pick up in store or have shipped from our remote warehouse.

Grand Deceptions is a compact study of Zionism exploring: - Israeli intrigue behind the 9/11 attacks and the fraudulent "war on terror" - The Zionist roots of neoconservatism and their central role in fomenting Middle East wars - Zionist manipulation behind the World Wars in order to establish Israel - Their collusion with the Nazis to expedite Jewish emigration to Palestine - Their key role in the Bolshevik revolution and Stalin's murderous regime - The fabrication of Holocaust history to suit Zionist geopolitical imperatives - The Zionist impetus behind Cultural Marxism and the Frankfurt School - And more.

Brandon Martinez is an independent writer and journalist from Canada who specializes in foreign policy issues, international affairs and 20th and 21st century history. For years he has written on Zionism, Israel-Palestine, American and Canadian foreign policy, war, terrorism and deception in media and politics. His articles and analysis have appeared on Press TV, Veterans News Now, Media With Conscience News, Intifada Palestine, Information Clearing House, What Really Happened, Levant TV and other alternative media outlets. He is the co-founder of Non-Aligned Media (http: //nonalignedmedia.com), a news and commentary website aimed at cutting through the spin and deception of mainstream media and deciphering truth in history. He is the author of Grand Deceptions, Hidden History and The ISIS Conspiracy