The Dying Citizen: How Progressive Elites, Tribalism, and Globalization Are Destroying the Idea of America (Hardcover) 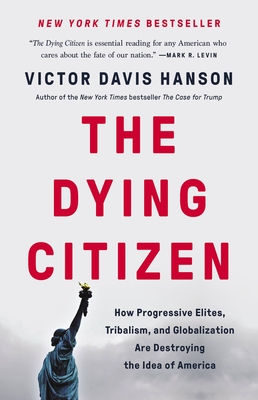 The New York Times bestselling author of The Case for Trump explains the decline and fall of the once cherished idea of American citizenship.

Human history is full of the stories of peasants, subjects, and tribes. Yet the concept of the “citizen” is historically rare—and was among America’s most valued ideals for over two centuries. But without shock treatment, warns historian Victor Davis Hanson, American citizenship as we have known it may soon vanish.

In The Dying Citizen, Hanson outlines the historical forces that led to this crisis. The evisceration of the middle class over the last fifty years has made many Americans dependent on the federal government. Open borders have undermined the idea of allegiance to a particular place. Identity politics have eradicated our collective civic sense of self. And a top-heavy administrative state has endangered personal liberty, along with formal efforts to weaken the Constitution.

As in the revolutionary years of 1848, 1917, and 1968, 2020 ripped away our complacency about the future. But in the aftermath, we as Americans can rebuild and recover what we have lost. The choice is ours.

Victor Davis Hanson is a senior fellow in military history at the Hoover Institution at Stanford University and a professor emeritus of classics at California State University, Fresno. He is the author of over two dozen books, most recently The Case for Trump. He lives in Selma, California.

“Mr. Hanson, an accomplished classicist and a senior fellow at the Hoover Institution, is one of the great amalgamators of American political writing. He has a particular gift for bringing together a dizzying array of events, controversies and ideas and making sense of them by advancing a coherent argument that incorporates thousands of years of history… Mr. Hanson hits hard, but I don’t find his analysis unfair or partisan. There is enormous value, moreover, in thinking about toxic political developments not as problems of the moment but as destructive pathologies to which all societies are prone at all times.”—Wall Street Journal

“Indispensable… Hanson’s immensely erudite and inspiriting book offers a most welcome corrective to those influential forces and doctrines in our midst that conspire to delegitimize the citizen and citizenship as such. In doing so, he provides us with hope that our society still has within it significant powers of rejuvenation.”—National Review

“As Victor Davis Hanson shows in his learned, powerful, and troubling new book, The Dying Citizen, the steady devolution of citizenship speaks volumes about where we are today and where we seem to be heading… Hanson lays out this grim diagnosis with his usual clarity and brilliance, moving easily from his deep specialized knowledge of the ancient Greek and Roman world through savvy observations about present-day politics and American society.”—The New Criterion

“Required reading for all those who seriously want to engage in the fieriest issues of our days at their most thoughtful levels of depth.”—Epoch Times

“Hanson is well-positioned to describe the evolution of citizenship from ancient times through the modern era, and especially the assumptions about citizenship underlying America's constitutional order… Hanson presents, clearly and concisely, a case that critics will struggle to refute. His troubling argument has far-reaching implications. The Dying Citizen is a book that all Americans should read, then discuss with friends and neighbors.”—Claremont Review of Books

“Among public intellectuals writing within a secular framework about America’s troubles, Victor Davis Hanson towers above the rest.”—First Things

“The Dying Citizen is essential reading for any American who cares about the fate of our nation.”—Mark R. Levin

“In The Dying Citizen, Victor Davis Hanson shows once again why he is America's premier scholar, writer, and political observer. Drawing on his training as a classicist, and clearly informed by his deep personal experience living and farming in California's San Joaquin Valley, Hanson has written a tour de force on the history, rights, and responsibilities of modern citizenship, and the galaxy of forces that are undermining the concept of American citizenship today. Immensely enlightening but also deeply unsettling, The Dying Citizen is a wake-up call for our countrymen who want to preserve the American ideal for future generations.”—Rep. Devin Nunes

“Citizenship brings all the enduring principles of democracy into the sphere of the individual.  It honors the human need for a collective identity even as it makes room for the individual to pursue happiness. In this remarkably illuminating book, Victor Davis Hanson shows how so many contemporary problems—identity politics, the border crisis, bloated government, etc.—have only worsened for the lack of a vigorous and clarifying idea of citizenship. In this deeply democratic idea, Hanson points to a way beyond what ails us.”
—Shelby Steele, author of Shame

“Politicians often speak to “my fellow citizens,” implying a kind of common project among all citizens.  In America, that project is our shared devotion to our founding principles.  Victor Davis Hanson explains in The Dying Citizen, however, that this uniquely American concept of citizenship is imperiled—whether from ancient threats like economic stagnation, open borders, and racial discord, or modern ones like unelected bureaucrats, anti-Constitution progressives, and globalists. As only he can, Hanson weaves together history, philosophy, and contemporary headlines to diagnose our current woes and to remind them that the cure lies in what is best in them and in America.”—Senator Tom Cotton

“Victor Davis Hanson’s book is not a complaint nor a polemic but rather a fine-grained diagnosis of a very serious disease. Its symptoms are all around us: the fragmentation of America’s national identity by the assertion of not merely separate but separatist identities with the vehement support of the most privileged of all Americans. May this brilliant diagnosis lead us to a cure.”—Edward N. Luttwak, author of The Rise of China vs. the Logic of Strategy

“The great glory of the democratic revolution of the eighteenth and nineteenth centuries was extending the blessings of citizenship to anyone and everyone who embraced the principles and responsibilities of self-governing nations. As Victor Davis Hanson explains, by subtle degrees we’re reversing course, through a deliberate attempt to dilute and eventually erase national identity, sovereignty, borders, and the meaningful content of citizenship itself. But if everyone is a “citizen of everywhere,” it means they are citizens of nowhere, with the return of autocratic rule the final result. The hour is late, and we have Hanson to thank for this capacious account of what we need to recover.”—Steven F. Hayward, author of Patriotism Is Not Enough

“This is not a drill—this is the real thing. If you don’t believe that the survival of the American republic hangs in the balance, you must read Victor Davis Hanson’s relentless exposition of the facts. America’s free citizenry is at imminent risk of defeat at the hands of an unelected Deep State allied to a globalist elite that flouts American law with impunity and plans to jettison the Constitution. Even if you think you’re informed and alarmed about these trends, Hanson’s brilliant presentation will leave you much better prepared to address these dangers. Get this book into the hands of everyone you know.”—David Goldman, deputy editor of Asia Times and author of You Will Be Assimilated

“Once again Victor Davis Hanson has written a masterly account of a great public affairs crisis. He has given a learned history of the concept and indispensability in a democracy of responsible citizenship; has perceptively chronicled how it has been undermined in the US; how Donald Trump in his sometimes frantic way tried to revive it, and of the tense but not unhopeful current prospects. This book is a concise masterpiece that all serious citizens should read.”
—Conrad Black

“This is a book about an ongoing and threatening change of ‘regime,’ which means a change not only in how we are governed but also in how we live. To understand such a thing requires perspective: Victor Hanson is deeply educated in the classics, where knowledge of regimes was first developed. It also requires a close observation of what is happening today, about which he writes insightfully and in profusion. In this book, Hanson demonstrates yet again his command across time and for our time. This book and he are a treasure.”
—Larry P. Arnn, president of Hillsdale College