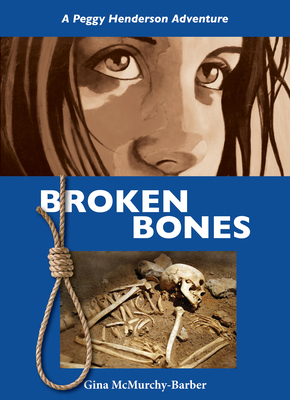 This is book number 2 in the Peggy Henderson Adventure series.

A vandalized burial in an abandoned pioneer cemetery brings 12-year-old Peggy Henderson and her elderly archaeologist friend Eddy to Golden, British Columbia, to excavate. The town dates back to the 1880s when most of the citizens were tough and rowdy miners and railway workers who rarely died of old age. Since the wooden burial markers disintegrated long ago, Peggy and Eddy have no way of knowing the dead mans identity. But when Eddy discovers the vertebrae at the base of the skull are crushed, a sure sign the cause of death was hanging, they have their first clue.

Peggy's tendency to make quick judgments about others leads her to the conclusion that only bad people are hanged, so the man in the burial must have gotten what he deserved. Hoping to learn more about him that proves her beliefs, she is soon digging through dusty old newspapers at the small-town museum. It's there that Peggy learns that sometimes good people do bad things.

Gina McMurchy-Barber is the author of Free as Bird and Reading the Bones, which received a 2009 Silver Birch Award nomination. She is the recipient of the 2004 Governor General's Award for Excellence in Teaching Canadian History. Gina lives in Surrey, British Columbia. Her website is www.ginabooks.com.

"Broken Bones provides the reader with some insight into how archaeologists work and the importance of the science in understand history, social life, customs, and culture."