The War Before: The True Life Story of Becoming a Black Panther, Keeping the Faith in Prison & Fighting for Those Left Behind (Paperback) 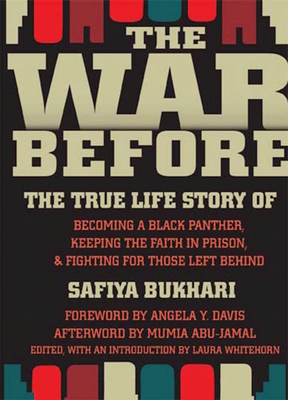 In 1968, Safiya Bukhari witnessed an NYPD officer harassing a Black Panther for selling the organization's newspaper on a Harlem street corner. The young pre-med student felt compelled to intervene in defense of the Panther's First Amendment right; she ended up handcuffed and thrown into the back of a police car. The War Before traces Bukhari's lifelong commitment as an advocate for the rights of the oppressed. Following her journey from middle-class student to Black Panther to political prisoner, these writings provide an intimate view of a woman wrestling with the issues of her time--the troubled legacy of the Panthers, misogyny in the movement, her decision to convert to Islam, the incarceration of out spoken radicals, and the families left behind. Her account unfolds with immediacy and passion, showing how the struggles of social justice movements have paved the way for the progress of today.

Born in Harlem, Safiya Bukhari joined the Black Panther Party in 1969. Imprisoned for nine years, Bukhari then co-founded the New York Free Mumia Abu-jamal Coalition and was co-chair of the Jericho Movemnet to Free US Political Prisoners and Prisoners of War. She died in 2003. Laura Whitehorn was a member of the Weather Underground, a supporter of the Black Civil Rights Movement, and the struggle for Puerto Rican independence. She worked to expose the illegal COINTELPRO of the FBI. Arrested in 1985, she became a defendant in the Resistance Conspiracy Case. She spent fourteen years in prison and was released in 1999. Born in Harlem, Wonda Jones is the daughter of Safiya Bukhari. Jones is the director of the Safiya Bukhari - Albert Nuh Washington Foundation, which raises funds for the families of US political prisoners. She is also a nurse and consultant to Field Up Productions, an independent film company that produces documentaries and dramatic features focusing on the Civil Rights era.

"There are speeches about political prisoners in the United States and memories of Safiya Bukhari's]life in the BPP. Together, the sum is considerably greater than the parts. Like a well-composed musical tone poem, the reader leaves this book with a sense of understanding and fulfillment"Ron Jacob, Counterpunch.org