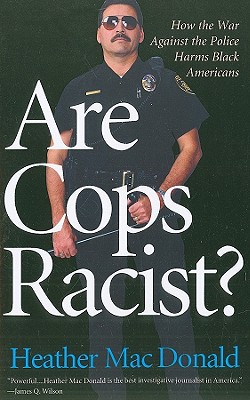 By Heather MacDonald
$18.95
Not currently on the shelf, but we can order it, to pick up in store or have shipped from our remote warehouse.

False charges of racial profiling threaten to obliterate the crime-fighting gains of the last decade, especially in America's inner cities. This is the message of Heather Mac Donald's new book, in which she brings her special brand of tough and honest journalism to the current war against the police. The anti-profiling crusade, she charges, thrives on an ignorance of policing and a willful blindness to the demographics of crime. In careful reports from New York and other major cities across the country, Ms. Mac Donald investigates the workings of the police, the controversy over racial profiling, and the anti-profiling lobby's harmful effects on black Americans. The reduction in urban crime, one of the nation's signal policy successes of the 1990s, has benefited black communities even more dramatically than white neighborhoods, she shows. By policing inner cities actively after long neglect, cops have allowed business and civil society to flourish there once more. But attacks on police, centering on false charges of police racism and racial profiling, and spearheaded by activists, the press, and even the Justice Department, have slowed the success and threaten to reverse it. Ms. Mac Donald looks at the reality behind the allegations and writes about the black cops you never heard about, the press coverage of policing, and policing strategies across the country. Her iconoclastic findings demolish the prevailing anti-cop orthodoxy.