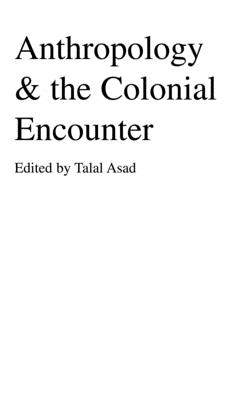 By Talal Asad (Editor)
Email or call for price.

"We have been reminded time and again by anthropologists of the ideas and ideals of the Enlightenment in which the intellectual inspiration of anthropology is supposed to lie. But anthropology is also rooted in an unequal power encounter between the West and the Third World, which goes back to the emergence of bourgeois Europe, an encounter in which colonialism is merely one historical moment. It is this encounter that gives the West access to cultural and historical information about the societies it has progressively dominated, and thus not only generates a certain kind of universal understanding, but also reenforces the inequalities in capacity between the European and the non-European worlds (and derivatively, between the Europeanized elites and the 'tradtional' masses in the Third World) . . ." – from the Introduction

The papers in this book analyze and document ways in which anthropological thinking and practice have been affected by British colonialism. They approach this topic from different points of view and at different levels. Each stands as an original contribution to an argument which is only just beginning.

Talal Asad is a Saudi Arabian anthropologist, currently working for the City University of New York Graduate Center. Asad’s studies in religious anthropology have led to many intellectual breakthroughs in the field of secularism. His book Formations of the Secular: Christianity, Islam, Modernity is considered to be one of the critical texts in the study. He is also the author of The Kababish Arabs: Power, Authority, and Consent in a Nomadic Tribe, Genealogies of Religion: Discipline and Reasons of Power in Christianity and Islam, and On Suicide Bombing.