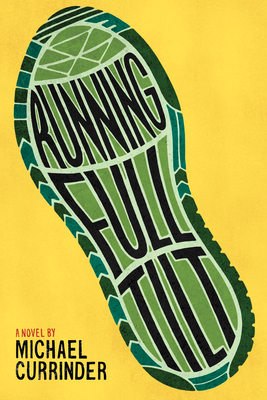 By Michael Currinder
$10.99
Email or call for price.

Praised by Jack Gantos, author of Dead End in Norvelt, as "a quick read with a kick at the finish," this debut novel sensitively and memorably captures a teen runner's relationship with his autistic older brother.

Like most siblings, Leo and Caleb have a complicated relationship. But Caleb's violent outbursts literally send Leo running. When the family is forced to relocate due to Caleb's uncontrollable behavior, Leo tries to settle into a new school, joining the cross-country team and discovering his talent for racing and endurance for distance. Things even begin to look up for Leo when he befriends Curtis, a potential state champion who teaches Leo strategy and introduces him to would-be girlfriend, Mary. But Leo's stability is short-lived as Caleb escalates his attacks on his brother, resentful of his sport successes and new friendships.

Leo can't keep running away from his problems. But, with a little help from Curtis and Mary, he can appreciate his worth as a brother and his own capacity for growth, both on and off the field.

Praise from Jack Gantos, author of Dead  End in Norvelt, Hole in My Life and The Trouble With Me: "Currinder's novel, Running Full Tilt, is a fast-paced convincing drama of a young runner whose legs circle him back to the many conflicts he is trying to escape--but he can't outrun himself. A quick read with a kick at the finish."

Praise from Paul Volponi, author of The Final Four, Black and White, and Rikers High:
"We feel the inner strength it takes to compete on every page of this splendid narrative, until, as readers, we are running as well--engrossed, and loving every step of the journey."

Mike Currinder ran cross-country and track in high school, and earned a college athletic scholarship. Running Full Tilt novel is a hybrid of his collective experiences as a competitive runner and as an adolescent with an autistic sibling. He is currently a teacher and track and cross-country coach at The American School in Japan. Running Full Tilt is his debut novel.

By the time Leo is a junior, his family has moved three times due to his older brother, Caleb, who has autism and other cognitive disabilities. Leo has grown accustomed to his brother’s lower functioning behavior, but Caleb is now prone to attacking Leo physically for unknown reasons. Leo literally starts long-distance running to get away from Caleb. The exercise soothes Leo, and it gives Caleb time to cool down. When Leo starts his new school, he signs up for cross-country track and finds friendship and guidance from senior team member Curtis and Coach Gorsky, as well as romance with Mary, an art student. The exhilaration of running and his social outlets balance his homelife, where Caleb constantly yells a litany of questions and his parents fight more and more, and provide him with coping mechanisms. But when tragedy strikes, Leo and his family face some hard truths. The writing is low-key; Leo has learned to rein in his emotions and feelings about Caleb, and the first-person narrative demonstrates this restraint yet provides vivid and detailed descriptions. The characterizations are complex and realistic, with sensitively depicted virtues and flaws, evoking empathy and sympathy in the reader. Currinder’s novel is poignant and powerful, with a story that is greater than the sum of its parts.
—Booklist, STARRED REVIEW

Currinder’s debut novel expertly navigates the complicated relationship between 17-year-old Leo Coughlin and his older brother, Caleb: “All I understood was that Caleb’s autism and cognitive delays meant that his brain made sense of the world in a different way than mine.” After Caleb’s unpredictable behavior makes them unwelcome in their St. Louis neighborhood, the family moves across town, which sets Caleb off and precipitates physical attacks on Leo. Leo’s only escape is to run—and he does, long and far. When Leo starts at a new high school in the fall, he goes out for the cross-country team and discovers a talent for the sport. Currinder lets his narrative unfold with the steady pace of a distance runner, allowing readers to gradually witness the joys and frustrations of having a neurodivergent sibling. The story is both tender and unabashedly honest in its portrayal of how Caleb affects Leo’s life. While the final chapters bring a tragic twist, the novel remains hopeful, and the resilient love between Caleb and Leo shines through.
—Publisher's Weekly

Currinder's quiet debut explores the complexities of living with a sibling with disabilities. High school junior Leo loves his older brother, Caleb, even if he doesn't always understand him. Caleb has autism, seizures, and unspecified cognitive delays that cause him to process and communicate with the world in ways that Leo does not. As Caleb's interactions with him become increasingly violent (though seemingly nonmalicious), Leo takes up running as a form of escape, firmly deciding he would rather find his own escape than risk institutionalizing Caleb. When their family decides to move from their St. Louis suburb to a town that will provide more privacy, Leo is excited about the prospect of joining his new school's cross-country team. The team, it turns out, is made up primarily of undedicated outsiders, with the exception of Curtis, an unusually formal and focused senior who immediately takes Leo under his wing. As Leo juggles his friendship with Curtis and a budding relationship with a female classmate, he also works to balance his home life, struggling with his relationship with Curtis and watching his parents' relationship rapidly deteriorate. Leo's first-person narration expresses affection and respect for Caleb, although his lengthy descriptions of training and races tend to drag for readers who are not enthusiastic runners. A late-in-the-book tragedy affirms problematic disability tropes, cheapens what seems otherwise to have been a sensitive depiction of a character with intersecting disabilities, and turns Caleb into a plot device. The primary cast is a white one. While Leo's story won't set any records, the right readers will happily race with him to the finish line.
—Kirkus Reviews


High school junior Leo Coughlin has a difficult home life. His older brother,Caleb, has autism, epilepsy, and some developmental disabilities—and hisdisruptive behavior has prompted the family’s move from one St. Louis suburbto another. Recently, Caleb has become physically aggressive with Leo, leavingscratches and bruises. Their parents’ marriage, which was rocky to begin with,is strained even more by the stress of the whole situation. Leo, who has begunrunning away from Caleb out of necessity, finds a hidden talent and joins first thecross-country team and then the track team at his new high school. A pair of newfriends—Curtis, his running buddy; and Mary, a sympathetic girlfriend—helphim maintain balance amidst the chaos, especially as he works through his complicatedrelationship with Caleb. That relationship is one of the strengths of thenovel, but it takes a tragic (and slightly clichéd) turn. The novel’s other strength isthe track races, with scenes full of action and suspense.
—Horn Book Magazine