A History of the Foreshore and the Law Relating Thereto: With a Hitherto Unpublished Treatise by Lord Hale, Lord Hale's de Jure Maris, and Hall's Essa (Hardcover) 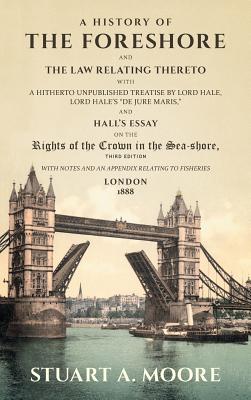 By Stuart a. Moore, Sir Matthew Hale (Essay by), Robert Gream Hall (Essay by)
Email or call for price.

This formidably learned history of riparian rights and fishery law from 765 CE to the late nineteenth century draws on a wide range of contemporary and historical materials, including a treatise by Sir Matthew Hale 1609-1676] De jure maris et brachiorum ejusdem]. Originally published: London: Stevens & Haynes, 1888. liv, 1], 984 pp. Moore 1842-1907] argues that "the theory of the prima facie title of the Crown is a mere theory of abstract law, a theory of law 'taken for granted, ' based upon an untrue assumption of a state of facts which might possibly have existed, but which is really not in accordance with the true state of the facts relating to the matter, so far as they can at present be ascertained" Introduction.

Also included in the contents of this work: Sir Matthew Hale, Narrative Legall and Historicall Touchinge the Customes; Robert Gream Hall, Essay on the Rights of the Crown and the Privileges of the Subject in the Sea-shores of the Realm. Reprint of the third edition.