Operation Hollywood: How the Pentagon Shapes and Censors the Movies (Hardcover) 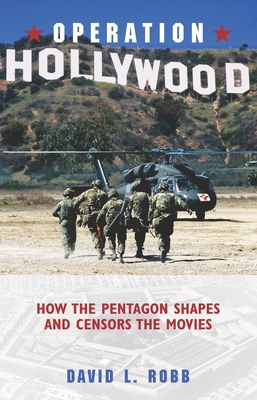 By David L. Robb
Email or call for price.
Hard to Find

The only thing Hollywood likes more than a good movie is a good deal. For more than fifty years producers and directors of war and action movies have been getting a great deal from America’s armed forces by receiving access to billions of dollars worth of military equipment and personnel for little or no cost. Although this arrangement considerably lowers a film’s budget, the cost in terms of intellectual freedom can be quite steep. In exchange for access to sophisticated military hardware and expertise, filmmakers must agree to censorship from the Pentagon.

As veteran Hollywood journalist David L. Robb shows in this revealing insider’s look into Hollywood’s "dirtiest little secret," the final product that moviegoers see at the theater is often not just what the director intends but also what the powers-that-be in the military want to project about America’s armed forces. Sometimes the censor demands removal of just a few words; other times whole scenes must be scrapped or completely revised. What happens if a director refuses the requested changes? Robb quotes a Pentagon spokesman: "Well I’m taking my toys and I’m going home. I’m taking my tanks and my troops and my location, and I’m going home." That can be quite a persuasive threat to a filmmaker trying to keep his movie within budget.

Robb takes us behind the scenes during the making of many well-known movies. From The Right Stuff to Top Gun and even Lassie, the list of movies in which the Pentagon got its way is very long. Only when a director is determined to spend more money than necessary to make his own movie without interference, as in the case of Oliver Stone in the creation of Platoon or Francis Ford Coppola in Apocalypse Now, is a film released that presents the director’s unalloyed vision.

For anyone who loves movies and cares about freedom of expression, Operation Hollywood is an engrossing, shocking, and very entertaining book.

David Robb (Beverly Hills, CA), an award-winning freelance journalist who has been nominated for the Pulitzer Prize three times, has published articles in the New York Times, Washington Post, Los Angeles Daily News, The Nation, LA Weekly, Salon.com, and Brill’s Content. For many years he was a labor and legal reporter for The Hollywood Reporter and Daily Variety.