Lies My Teacher Told Me about Christopher Columbus: What Your History Books Got Wrong (Paperback) 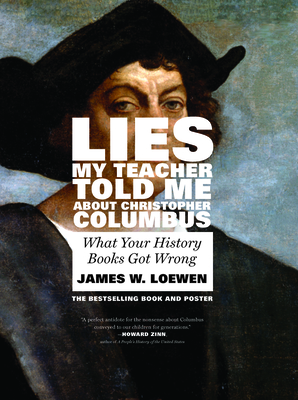 Some myths don't die, and lies are still being told about Christopher Columbus: that he "discovered" the Americas (not only was the land familiar to native inhabitants, but it had also been visited before by Europeans), that the land was sparsely populated by native people (there were fourteen million inhabitants in 1492), that those people were primitive (Europeans learned a lot and gained technology and agricultural skill from Native Americans), and that they submitted to Columbus's "God-like" authority (they submitted to the deadly smallpox and bubonic plague that Columbus's crew imported from Europe). Lies My Teacher Told Me About Christopher Columbus disproves the myths about Columbus still enshrined in American textbooks with quotations from primary source material that sets the record straight. The poster and accompanying 48-;page paperback book sum up the mistellings--and reveal the real story--in a graphically appealing and accessible format that shows the degree to which textbooks have "lied" by knowingly substituting crowd-pleasing myths for grim and gruesome historical evidence.

James W. Loewen is the bestselling and award-winning author of Lies My Teacher Told Me, Lies Across America, and Sundown Towns (all available from The New Press), among many other books and articles. He won a Sydney Spivack Award from the American Sociological Association, the Oliver Cromwell Cox Award for Distinguished Anti-Racist Scholarship, and the Spirit of America Award from the National Council for the Social Studies, among many other honors. He is a regular contributor to the History Channel's History magazine. Loewen is a professor emeritus of sociology at the University of Vermont and lives in Washington, D.C.