The Spirit of Laws (Paperback) 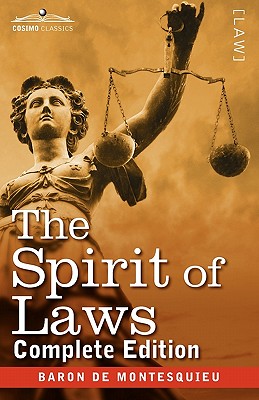 The Spirit of Laws, first published in 1750, is a detailed treatise on the structures and theory of government by French political philosopher Baron de Montesquieu. Unlike his well-loved Persian Letters, The Spirit of Laws scandalized the French-it was even banned by the Roman Catholic Church. The fact that it is hardly dated to modern readers is a testament to how revolutionary it must have seemed 250 years ago. Among its comparisons of different forms of governments, such as monarchies, despotic regimes, and republics, is the now-famous section on Montesquieu's concept of the separation of powers, dividing the ruling body into legislative, executive, and judicial branches. Also included is the author's thinking on slavery, religion in government, families and censuses, the influence of climate on politics and culture, and the making of laws. A powerful influence on the framers of the U.S. Constitution, this classic work will appeal to history buffs and anyone interested in the roots of modern political theory and government. CHARLES-LOUIS DE SECONDAT, BARON DE MONTESQUIEU (1689-1755), born in the South of France and often known simply as Montesquieu, was a political philosopher and social commentator known for his influential political views, especially for his "separation of power" theory, still used today in constitutions around the world. Some of his best-known work, the satirical Persian Letters, which made fun of life in Paris under Louis XIV, delighted France in the 1720s.