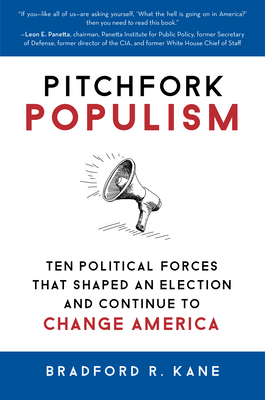 A veteran political analyst examines the forces that led to the rise of the current form of populism and considers their continuing influence on the future of American politics.

What political, social, and cultural forces led to the election of President Donald Trump? Political analyst Bradford R. Kane explores ten dynamics of American politics and society that played a role in the 2016 presidential election and continue to exert an influence on current politics. The author examines both the present impact of the Trump presidency and the future trajectories of the trends that brought Trump to power.

Some of these dynamics have deep historical roots, such as the cultural divide between those who define our national identity in terms of rugged individualism versus those who emphasize community collectivism. The author notes that these opposing viewpoints helped craft our national identity as far back as the 1700s. He also considers the effect of changing demographics, such as the trend that points to the emergence of a new majority composed of combined minority groups, which will have a profound effect on community relations and politics.

Kane foresees a return to established policy processes and governing principles after the Trump presidency, as opposed to rule based on the president's personal interests. He anticipates greater empowerment of the electorate as more demographic groups are increasingly enfranchised. Kane also forecasts the potential impact of recent developments on the 2020 election and beyond. Other topics discussed are the role of the media, accountability, globalization, the future of bipartisanship, and more.

This astute analysis by a veteran government insider will help Americans understand recent events and provides a roadmap for navigating the future political landscape.

Bradford R. Kane has served in the US Congress as Legislative Counsel to Congresswoman Cardiss Collins; as Counsel to the House Energy and Commerce Subcommittee on Commerce, Consumer Protection; and as a member of President Clinton's Task Force on Health Care Reform. Thereafter, he served the State of California as Deputy Controller, Legislation, and subsequently, as a Deputy Secretary of Information Technology. He was also a member of the Nielsen Media Research Task Force on Television Measurement; created the Bipartisan Bridge (a public policy initiative to advance bipartisanship in American government); and developed environmental and economic equity initiatives. In the global arena, he was CEO of the International Commission on Workforce Development; a Strategy Council member of the United Nations Global Alliance on ICT & Development; and Director of International Development and Director of Strategic Initiatives for TechSoup Global.

'A timely and truly fascinating deep dive into the unusual and often strange developments in the current American political system. The book explores whether traditional bipartisanship is even possible in the era of Trump, amid the political earthquake he and others have facilitated. As a long-term politician and former congressman from a state with a deep history of populism, I found myself captivated. This is an important read, given our nation’s often terrifying political climate.”

“Bradford R. Kane has produced a cogent, reasoned, and contextualized description of how we got to this sorry place and how we might move past it. There’s hope!”

“Depending on what side of the current political divide you find yourself, 2016 will mark either the year that the United States began its decline and fall or the moment when America was made ‘great again.’ Many books will yet be written in efforts to understand just what happened in 2016 and what it means. Bradford Kane has written a primer that will be necessary reading for anyone, today or in the future, wanting to understand this tumultuous time. But Kane’s book is more than this. Beautifully written in clear prose, it not only tells the story of how we got to this point in our history and what this juncture might bode for our future but, most urgently, how we might yet ensure the survival of the American Constitution, that great experiment in governing.”