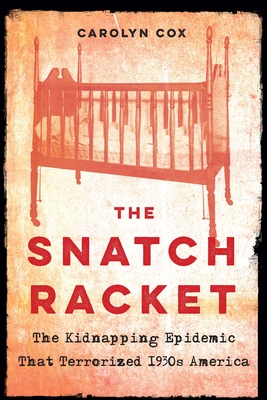 Although the 1932 kidnapping of aviator Charles Lindbergh’s baby was a worldwide sensation, it was only one of an estimated three thousand ransom kidnappings that occurred in the United States that year. The epidemic hit America during the Great Depression and the last days of Prohibition as criminal gangs turned kidnapping into the highly lucrative “snatch racket.”

Wealthy families and celebrities purchased kidnap insurance, hired armed chauffeurs and bodyguards, and carried loaded handguns. Some sent their children to school or summer camp in Europe to get them out of harm’s way. “Recent Kidnappings in America” was a regular feature in the New York Times, while Time magazine included kidnappings in its weekly list of notable births, deaths, and other milestones.

The Snatch Racket is the story of a crime epidemic that so frightened families that it undermined confidence in law enforcement and government in general. In response, President Franklin D. Roosevelt waged a three-year War against Kidnappers with J. Edgar Hoover and his G-men (newly empowered to carry weapons and make arrests) on the front lines. This first U.S. war against terrorism revolutionized and modernized law enforcement in the United States, dramatically expanding the powers of the federal government in the fight against not only kidnapping but many new types of interstate crime.

At the heart of the narrative are some of the most iconic names of the twentieth century: Rockefeller, Ford, Lindbergh, Roosevelt, Hoover, Capone, Schwarzkopf, and Hearst, all caught up in the kidnapping frenzy. The Snatch Racket is a spellbinding account of terrifying abductions of prominent citizens, gangsters invading homes with machine guns, the struggles of law enforcement, and the courage of families doing whatever it took to bring home the ransomed.

Carolyn Cox is a retired partner of the law firm WilmerHale in Washington, DC, and a former adjunct professor at Georgetown University Law Center and American University Law School.

"Crisp, zesty and free of the clichés of most true-crime writing, Ms. Cox's book interweaves her case narratives with the inside story of how Hoover exploited the crisis to launch a 'crusade' against organized crime, even coining the term 'G-men' to glamorize his agents."—Edward Kosner, Wall Street Journal

"At a time when policing is under fire, and the problematic techniques they use with sometimes innocent subjects as well as the treatment of outsiders (Hauptman was an illegal German immigrant) are very much in the news, Cox has found a subject that can capture a wide audience both in its style and its implications about the justice system. She raises a host of questions about this era, concerning justice denied and justice misapplied in regard to the FBI, and about local policing. She also shows how the desire for aggrandizement and power plays a significant part in our criminal justice history. She does this subtly and behind the scenes of her stories. And she makes a good case for our historical shortcomings in pursuing and convicting criminals."—Paula S. Fass, Criminal Law and Criminal Justice Books

“Carolyn Cox throws a fascinating new light on a horrifying crime wave that shook America in the 1930s. While the shocking Lindbergh case has understandably gone down in history, it was just one of a whole series of horrible kidnappings that have until now passed into obscurity. In telling this extraordinary story, Cox combines meticulous scholarly research with the thriller writer’s fast pace and eye for colorful detail. The result is a terrific read.”—Sandra Hempel, author of The Atlas of Disease and The Inheritor’s Powder

“Every crisis creates opportunity for people smart enough to see it and agile enough to grasp it. In this finely wrought narrative Carolyn Cox shows us how J. Edgar Hoover and his nascent Bureau of Investigation launched a war against kidnapping that pit them against both rival bureaucrats and a parade of colorful gangsters from Machine Gun Kelly to Alvin Karpis to Ma Barker and the rest. The struggle captured public imagination at the time and makes for a great read. This is an important story well told.”—Kenneth D. Ackerman, author of Young J. Edgar: Hoover and the Red Scare, 1919–1920

“Simply fascinating. A richly detailed, behind-the-scenes autopsy of how the FBI and rival law enforcement agencies demolished the Barker-Karpis gang and other criminals who perpetrated the shocking wave of kidnappings (including the tragic abduction of the Lindbergh baby) that so outraged America in the early 1930s. Best of all, author Carolyn Cox reveals how the war between the G-men and gangsters changed the course of federal criminal law, the power of J. Edgar Hoover, and how the public viewed the Public Enemies–era gangsters like Machine Gun Kelly, Alvin ‘Creepy’ Karpis, and John Dillinger.”—Paul Maccabee, author of John Dillinger Slept Here: A Crooks’ Tour of Crime and Corruption