How Obama Failed Black America and How Trump is Helping It: The Dirty Little Secret that the Media Won't Tell You (Hardcover) 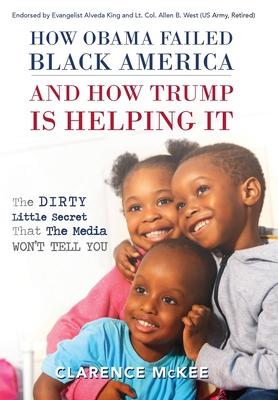 By Clarence McKee
$23.00
Not currently on the shelf, but we can order it, to pick up in store or have shipped from our remote warehouse.

There has been little if any criticism of Barack Obama's failings in terms of the black community. He remains to this day the darling of the black political, media and civil rights establishment and the mainstream media, despite his having given priority to the concerns of other groups, such as those favoring same sex marriage, abortion on demand, and amnesty for illegal aliens. He routinely played the race card and demonized police to placate blacks in order to show relevancy to the black community while ignoring urban violence and black on black crime.

In this book, Clarence McKee exposes the dirty little secret of how Barack Obama failed to address the problems and issues impacting black Americans and how Donald Trump's policies are benefitting them. The book includes McKee's over thirty real time articles and commentary which deal with Obama's policies and positions on immigration, his "food stamp nation," strong support of abortion and Planned Parenthood, his race baiting and division, and his insensitivity to black issues such as urban violence and school choice options for poor children. It goes on to show how the Trump agenda and policies, including illegal immigration, criminal justice reform, the sanctity of life of the unborn, school choice, urban revitalization and the economy, are benefiting black Americans. Finally, the book gives an historical perspective on how the black political and civil rights leadership has historically served as "Overseers" of the Democratic Party's "Black Plantation."