Cash on Cash: Interviews and Encounters with Johnny Cash (Musicians in Their Own Words #21) (Paperback) 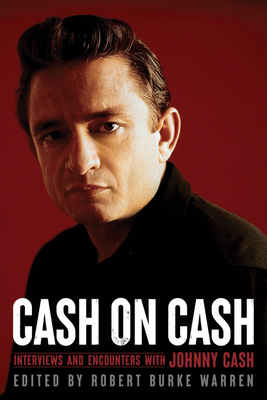 Cash on Cash offers unprecedented insight into one of the most significant American cultural figures of the twentieth century.

As an interviewee, Cash was an exemplary communicator to an astonishingly broad spectrum of people: always open and articulate, part friend, part spiritual authority, part flawed hero. Throughout a decades-long career, as Cash took risks, embracing new technologies, formats, and attitudes, he cleaved to a simple, core message of unvarnished truth.

A comprehensive collection of Johnny Cash interviews and feature stories, some widely published and others never previously transcribed, culled from the 1950s through the early days of the new millennium, Cash on Cash charts a singular evolution. From hardscrabble Arkansas poor boy to rockabilly roustabout; international fame to drug addiction and disgrace; born again Christian to gimlet-eyed chronicler of spiritual darkness; TV and movie star to Nashville reject; redemption to loss and back again, several times.

Cash’s story, told in his own words, shines unfiltered light on a journey of archetypal proportions that resonates still.

Robert Burke Warren is a published novelist, musician, educator, and journalist based in the Catskill Mountains of New York. His music writing has been published in Vulture, Paste, Salon, the Woodstock Times, Longreads, the Rumpus, the Rock & Roll Hall of Fame’s publications, and the 2006 Da Capo Press anthology The Show I’ll Never Forget.

"Johnny Cash’s songs of love, death, and divine retribution suggested a man of a somber, mysterious nature. In Cash on Cash, Warren has collected Cash’s own words, from successive stages of a legendary career, to reveal the generous and life-embracing spirit that drove the Man in Black. His unfiltered thoughts and insights—with Warren’s insightful framing of each entry—present a complete biographical sweep of a life well lived, an arc of personal growth and spiritual self-discovery that makes this book surprisingly deeper and far more valuable than a mere collection of interviews." —Ashley Kahn, author of George Harrison on George Harrison, A Love Supreme: The Story of John Coltrane’s Signature Album, and other music titles

"I had a few encounters with the Man in Black, and any further insights into his brilliance, humility, complexity, and charm is going to be a winner for me. A towering figure who kissed my mum smack on the lips backstage at a gig in my hometown Wales back in 1990 and silenced all her doubts about my career choices." —Jon Langford, musician, artist, writer

“This book lovingly makes the case for Johnny Cash’s reappraisal and continued relevance. Robert Burke Warren has breathed new life into Cash’s words with his own concise and compelling historical narrative. His insights give invaluable context—and he does it all in the same plainspoken and unpretentious language as the Man in Black himself.” —The Reverend Shawn Amos, musician, author of Cookies & Milk

"Johnny Cash is so much more than an icon. He was a complex, complicated man of deep faith, staunch principles, and mortal failings. Robert Burke Warren has captured all the ripples and depths here, revealing the man as well as the myth and the legend." —Holly Gleason, author, Woman, Walk the Line

"[Cash on Cash] is an intriguing and often insightful collection. For Cash aficionados, music critics, and researchers." — Library Journal

"Robert Burke Warren does a deft job of pulling together both familiar and previously unpublished interviews into a revelatory self-portrait." — Chronogram