The Breakdown of Higher Education: How It Happened, the Damage It Does, and What Can Be Done (Hardcover) 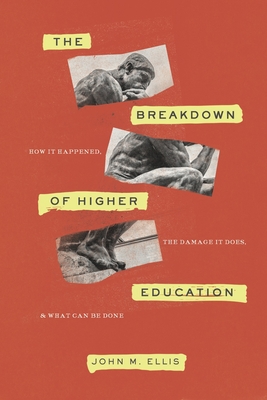 By John M. Ellis
$25.99
Not currently on the shelf, but we can order it, to pick up in store or have shipped from our remote warehouse.

A series of near-riots on campuses aimed at silencing guest speakers has exposed the fact that our universities are no longer devoted to the free exchange of ideas in pursuit of truth. But this hostility to free speech is only a symptom of a deeper problem, writes John Ellis. Having watched the deterioration of academia up close for the past fifty years, Ellis locates the core of the problem in a change in the composition of the faculty during this time, from mildly left-leaning to almost exclusively leftist. He explains how astonishing historical luck led to the success of a plan first devised by a small group of activists to use college campuses to promote radical politics, and why laws and regulations designed to prevent the politicizing of higher education proved insufficient. Ellis shows that political motivation is always destructive of higher learning. Even science and technology departments are not immune. The corruption of universities by radical politics also does wider damage: to primary and secondary education, to race relations, to preparation for the workplace, and to the political and social fabric of the nation. Commonly suggested remedies--new free-speech rules, or enforced right-of-center appointments--will fail because they don't touch the core problem, a controlling faculty majority of political activists with no real interest in scholarship. This book proposes more drastic and effective reform measures. The first step is for Americans to recognize that vast sums of public money intended for education are being diverted to a political agenda, and to demand that this fraud be stopped.

John M. Ellis is Distinguished Professor Emeritus of German Literature at the University of California, Santa Cruz. He taught at universities in England, Wales, and Canada before joining UCSC in 1966, serving as dean of the Graduate Division in 1977-86. He is the author of ten books, including Literature Lost (Yale), awarded the Peter Shaw Memorial Award by the National Association of Scholars. He founded the Association of Literary Scholars and Critics in 1993, and served as president of the California Association of Scholars in 2007-13 and chairman of its board since then. His articles on education reform have appeared in prominent national publications.