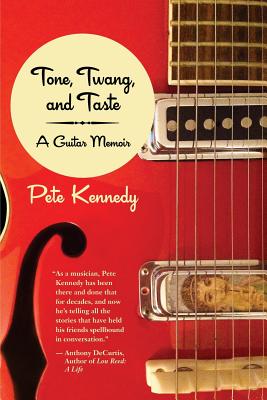 "I was hanging around backstage with Sinatra's band..."

That's just the tip of the iceberg in Pete Kennedy's kaleidoscopic musical career of unforgettable collaborations with many of the giants of pop, classical, and folk music. In Tone, Twang and Taste, he passes along not only that experience, but also the inspiration he drew in his peripatetic half-century on the road. A natural raconteur, Kennedy offers a memoir that is part travel narrative, part musical history, and part behind-the scenes look at a world of fascinating characters. Ultimately, it is a clarion call to his readers to follow their dreams, never stop learning, and do what they love the most.

"As a musician, Pete Kennedy has been there and done that for decades, and now he's telling all the stories that have held his friends spellbound in conversation. Turns out he's as stylish a writer as he is a player. Reading him is as satisfying as hearing a great song." - Anthony DeCurtis, Author of Lou Reed: A Life