Magna Carta: A Captivating Guide to the History of the Great Charter and its Influence on Medieval England and the Rest of the Worl (Hardcover) 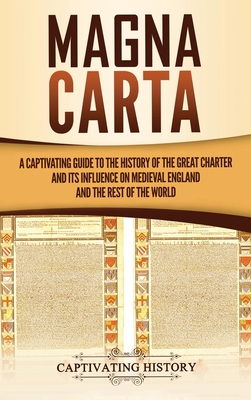 If you want to discover the captivating history of the Magna Carta, then keep reading...

The Magna Carta is celebrated as one of the most important documents in human history. It is the main source of constitutional law around the world, promising people liberties and protection from the arbitrary power of the government.

However, it is also a set of promises extorted in bad faith from an unwilling king, and these promises dealt with the problems of the 13th-century aristocracy. Among the ordinary problems of fees, customs, and land law, greater ideas found their way into the document, revolutionary ideas that would change the world.

Some parts of the Magna Carta are still quoted, such as clauses that deal with justice before peers, freedom from unlawful imprisonment, freedom of the church, and so on. However, in medieval times, these clauses did not have the same meaning as they do today. The Magna Carta showed itself to be a flexible document with ideas that could be bent and transformed to suit the needs of the new times.

In Magna Carta: A Captivating Guide to the History of the Great Charter and its Influence on Medieval England and the Rest of the World, you will discover topics such as

So if you want to learn more about the Magna Carta, scroll up and click the "add to cart" button