Ancient African Kingdoms: A Captivating Guide to Civilizations of Ancient Africa Such as the Land of Punt, Carthage, the Kingdom of Aksum, the M (Paperback) 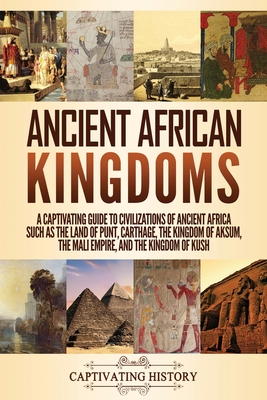 If you want to discover the captivating history of ancient Africa and the Kingdom of Kush, then keep reading...

Two captivating manuscripts in one book:

Africa is the continent where the first humans were born. They explored the vast land and produced the first tools. And although we migrated from that continent, we never completely abandoned it. From the beginning of time, humans lived and worked in Africa, leaving evidence of their existence in the sands of the Sahara Desert and the valleys of the great rivers, such as the Nile and Niger. Some of the earliest great civilizations were born there, and they give us an insight into the smaller kingdoms of ancient Africa.

Egypt is the main source of knowledge of many neighboring kingdoms that were just as rich and developed. Unfortunately, they were forgotten in time, as other civilizations and kingdoms replaced them as the continent's power bases. Only recently are we rediscovering the might of the Kingdom of Aksum, the political prowess of Kush, and the richness of the mysterious Punt. The early medieval kingdoms of Ghana and Mali are still being researched due to their unique pre-Muslim culture and their own outlook on Islam.

As the home of the many pharaohs, Queen Sheba, Hannibal Barca, and Mansa Musa, Africa deserves our full attention. It has stories to tell us and cultural riches to share with us. Africa is where paganism, Christianity, and Islam left their trails and created a cultural fusion that is unique to the continent. Some modern countries are popular tourist destinations, while others are war-torn lands still unable to industrialize. This polarity of Africa can be traced to ancient times, and the world-shaping events that occurred here need to be studied and understood.

Some of the topics covered in part 1 of this book include:

Some of the topics covered in part 2 of this book include:

So if you want to learn more about ancient Africa and the Kingdom of Kush, scroll up and click the "add to cart" button