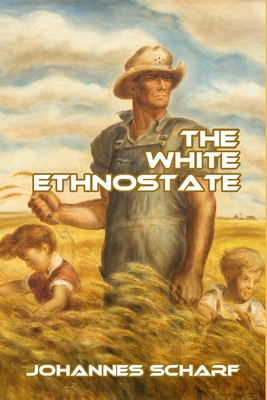 By Johannes Scharf
Email or call for price.
NOT AVAILABLE PLEASE DON'T ORDER

Translated by Constantin von Hoffmeister. The English translation of Johannes Scharf's highly acclaimed original work in German, The White Ethnostate brings home the argument for the creation of European ethnostates. An eminently practical work, it maps out the pertinent issues involved in this ideal, including:

- The moral and political reasons why a European ethnostate should be created;

- The political realities facing those concerned about ensuring European survival;

- The question of whether there should be one, or many, ethnostates;

- Who should qualify for residence in such as state (or states);

- Why an ethnostate offers the best possibility for ensuring European survival;

- How the ethnostate idea is growing as a viable alternative idea;

- Why fate demands the ethnostate as a right for future generations; and

- The practical steps which need to be taken to achieve an ethnostate.

With a foreword by Arthur Kemp (which deals with the most common objections raised against the ethnostate idea) and an afterword by Constantin von Hoffmeister (which deals with further pertinent general points on the ethnostate), this timely work further solidifies the concepts behind the most urgent task facing Europeans today: surviving in a world which seems determined to see their extinction.

Foreword by Arthur Kemp: Mapping out the Alternatives

Why Ought the White Race be Protected?

Vision Nova Europa: Utopia or Imperative of the Hour?

The Ethnic Composition of the White Ethnostate

Geographic Consolidation: A Strategy Against Extinction

The Exodus Idea Has Now Reached the Conservative Mainstream

American Oranias: The First Step Towards the Ethnostate