The Every Student Succeeds Act: What It Means for Schools, Systems, and States (Educational Innovations) (Paperback) 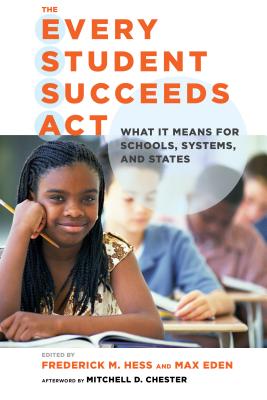 In this foundational book, Frederick M. Hess and Max Eden bring together a cross-section of respected academics and journalists to examine key aspects of the Every Student Succeeds Act (ESSA). This volume provides a thematic and in-depth analysis of the central provisions of this landmark legislation, presenting a range of perspectives. The contributors--leading researchers, policy analysts, and journalists--explore the conflicts and compromises that shaped the emerging law, outline its core provisions, and trace its implications for urban districts, states, and the federal government. Complementing these descriptions are chapters presenting opposing viewpoints on the law's merits and its ramifications for future reform efforts. Enacted in December 2015, ESSA represents a major shift of the federal role in education, and its provisions touch on almost every aspect of education policy. Yet it arrived in something of a whirlwind, and scholars, advocates, and policy makers are struggling to make sense of this new act. By bringing together leading thinkers to make sense of this important law, The Every Student Succeeds Act provides a solid foundation for scholars, advocates, and policy makers as they begin to navigate a new era in education policy.

Frederick M. Hess is director of education policy studies at the American Enterprise Institute (AEI). An educator, political scientist, and author, he studies K-12 and higher education issues. His books include The Cage-Busting Teacher, Cage-Busting Leadership, Breakthrough Leadership in the Digital Age, The Same Thing Over and Over, Education Unbound, Common Sense School Reform, Revolution at the Margins, and Spinning Wheels. He is also the author of the popular Education Week blog Rick Hess Straight Up, and is a regular contributor to The Hill and to National Review Online. Hess's work has appeared in scholarly and popular outlets such as Teachers College Record, Harvard Education Review, Social Sciences Quarterly, Urban Affairs Review, American Politics Quarterly, Chronicle of Higher Education, Phi Delta Kappan, Educational Leadership, U.S. News & World Report, USA Today, Washington Post, New York Times, Wall Street Journal, The Atlantic, and National Affairs. He has edited widely cited volumes on the Common Core, the role of for-profits in education, education philanthropy, school costs and productivity, the impact of education research, and No Child Left Behind. Hess serves as executive editor of Education Next, as lead faculty member for the Rice Educational Entrepreneurship Program, and on the review board for the Broad Prize for Public Charter Schools. He also serves on the board of directors of the National Association of Charter School Authorizers and 4.0 SCHOOLS. A former high school social studies teacher, Hess teaches or has taught at the University of Virginia, the University of Pennsylvania, Georgetown University, Rice University, and Harvard University. He holds an MA and PhD in government, as well as an MEd in teaching and curriculum from Harvard University. Max Eden is a senior fellow at the Manhattan Institute (MI). Before joining MI, he was program manager of the education policy studies department at the American Enterprise Institute. His research interests include early education, school choice, and higher education reform. Eden's work has appeared in scholarly and popular outlets such as the Journal of School Choice, Encyclopedia of Education Economics and Finance, Washington Post, U.S. News & World Report, National Review, Claremont Review of Books, and the Weekly Standard. He holds a BA in history from Yale University.