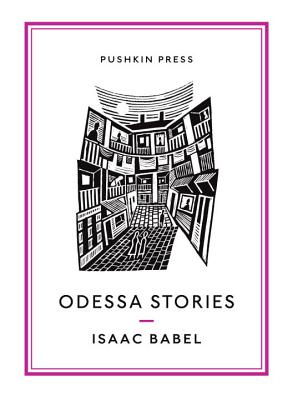 'Everyone makes mistakes, even God.'

In the original Odessa Stories collection published in 1931, Babel describes the life of the fictional Jewish mob boss Benya Krik - one of the great anti-heroes of Russian literature - and his gang in the ghetto of Moldavanka, around the time of the October Revolution. Praised by Maxim Gorky and considered one of the great masterpieces of twentieth-century Russian literature, this is the first ever stand-alone collection of all Babel's narratives set in the city, and includes the original stories as well as later tales.

Isaac Babel was a short-story writer, playwright, literary translator and journalist. He joined the Red Army as a correspondent during the Russian civil war. The first major Russian-Jewish writer to write in Russian, he was hugely popular during his lifetime. He was murdered in Stalin's purges in 1940, at the age of 45.

Translated from Russian by Boris Dralyuk.

“One of those 'where have you been all my life?' books… Fractured, jarring, beautiful, alive to humour… an excellent translation.” — Nicholas Lezard, The Guardian

"These celebrated stories have never been rendered with the cutting flair Boris Dralyuk’s new English translations impart to them. . . Babel’s is an ebullient elegy, filled with violence, sex, and life" — Los Angeles Review of Books

"The salty speech of the city's inhabitants is wonderfully rendered in a new translation by Boris Dralyuk, who preserves the characters' Yiddishisms ("He doesn't talk much, but when he talks, you want he should keep talking") and imbues the dialogue with hard-boiled language reminiscent of Dashiell Hammett ("Buzz off, coppers... or we'll flatten you"). Although Babel mostly lets characters speak for themselves, the narrators' descriptions can be as luxurious as the stolen jewels given to Benya's sister on her wedding night, or as surprising as a slap in the face." — Vice

“The stories read wonderfully. Dralyuk has done an excellent job of capturing Babel’s ‘voice’ and in particular of conveying the tone of Odessan Russian.” — Barry Scherr, Emeritus Professor of Russian, Dartmouth College

"Aside from being a great writer, Babel stands as an emblem of the tragedy of 20th century totalitarianism... literary genius framed by 20th-century tragedy." — New York Times

"I had read Babel before, but never realized what I was missing. This was the first time I felt that I really had read Babel. It was just a total experience." — Corey Robin, Cullman Center Fellow, for New York Public Library blog

"This is a wonderful, highly readable collection of stories." — The London Magazine

"His is still an original, sparky voice sounding out of the great Russian literary pantheon." — Paddy Kehoe, RTE Arena

"It is impossible to look at the world the same way after reading Babel... one of the enduring jewels of 20th-century Russian literature." — Financial Times

"Lively and entertaining, wonderful written and gives a captivating yet poignant glimpse of a lost world. Plus it’s a beautifully produced Pushkin edition – so what more could you want?" — Kaggy's Bookish Ramblings blog