Myanmar's Enemy Within: Buddhist Violence and the Making of a Muslim 'Other' (Asian Arguments) (Paperback) 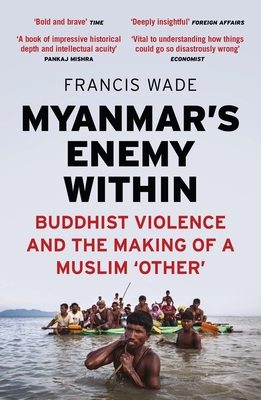 By Francis Wade
Email or call for price.
Out of Print

For decades Myanmar has been portrayed as a case of good citizen versus bad regime – men in jackboots maintaining a suffocating rule over a majority Buddhist population beholden to the ideals of non-violence and tolerance. But in recent years this narrative has been upended.

In June 2012, violence between Buddhists and Muslims erupted in western Myanmar, pointing to a growing divide between religious communities that before had received little attention from the outside world. Attacks on Muslims soon spread across the country, leaving hundreds dead, entire neighbourhoods turned to rubble, and tens of thousands of Muslims confined to internment camps. This violence, breaking out amid the passage to democracy, was spurred on by monks, pro-democracy activists, and even politicians.

In this gripping and deeply reported account, Francis Wade explores how the manipulation of identities by an anxious ruling elite has laid the foundations for mass violence, and how, in Myanmar’s case, some of the most respected and articulate voices for democracy have turned on the Muslim population at a time when the majority of citizens are beginning to experience freedoms unseen for half a century.

Francis Wade is a freelance journalist. His work has appeared in the Guardian, Al Jazeera English, Asia Times Online, Foreign Policy, and Los Angeles Review of Books. He previously worked as an editor and reporter for the Democratic Voice of Burma, an exiled Burmese news organization based in Thailand.

“Wade has invested immense energy in pursuit of the truth about the tragedy of Myanmar and its Muslim population. There is no other writer on this topic with the same moral courage and intellectual insight. His work demands serious attention.”
— Fergal Keane, BBC correspondent and author of Road of Bones: The Epic Siege of Kohima

“The roots of ethnic and religious conflict in Myanmar, especially in relation to anti-Muslim hatred, stretch back further than is often acknowledged. By training his analysis on relatable perspective via rich reporting, Wade seeks to trace the lineage of violence, for which some of Myanmar’s present-day leading lights and even venerated monks are culpable, in an investigation that’s at once illuminating and sobering.”
— Los Angeles Review of Books

“Bold and brave. . . . Wade's book tells the personal stories of Muslim and Buddhist characters who have animated the tragic scenes of Myanmar's deadly morality play.”
— TIME

“A fine, engrossing work, at the centre of which is that all too common enmity and conflict between people of different religious and ethnic adherences.”

— Paul Brass, author of The Production of Hindu-Muslim Violence in Contemporary India

“This gripping investigation into the plight of Myanmar’s Muslim community reads like a forensic case history, uncovering the full extent of a nation’s festering wound. Lucid, compassionate, admirably researched and reasoned, here is scholarly reportage at its best.”
— Wendy Law-Yone, author of Golden Parasol: A Daughter's Memoir Of Burma

“[An] insightful, well-researched new book. . . . Wade shows the role that nationalist Buddhist monks have played in the ongoing devastation of the Rohingya in Myanmar. He reveals the flaws that have always existed in Myanmar’s fragile democratization.”
— Washington Monthly

“As Wade’s excellent new book shows, this disaster was easily predictable and, with a bit of forethought, could have easily been prevented.”
— Literary Review

“This is a deeply insightful work on the dynamics of ethnic violence.”
— Foreign Affairs

“A book of impressive historical depth and intellectual acuity. Wade shatters many clichés about religious violence as he explores its tangled roots in Buddhist Myanmar.”
— Pankaj Mishra, author of Age of Anger: A History of the Present

“For anyone wanting to understand the situation in Myanmar, and how international and domestic optimism for the new era got ground down so quickly, this will be an important addition to the bookshelf.”
— Post Magazine

“Wade’s book is grounded in his reporting, which is rich in detail and the voice of Burmese people. . . . Myanmar’s Enemy Within is not just about the Rohingya. It also describes the discrimination face by other minority ethnic or religious groups in the country.”
— Times Literary Supplement

“Wade argues that a toxic combination of ethnic antagonisms rooted in colonial rule, the military’s xenophobic nation-building agenda and a powerful, radical Buddhist lobby have produced a deeply fissured society, one that allowed for the dehumanization of the Rohingya. Rather than a casualty of these conspiring forces, democracy has helped precipitate the crisis, Wade argues, exacerbating anxieties about who does and does not belong in Myanmar’s changing political order.”
— News Deeply

“In every way, Francis Wade has presented an outstanding account of a complex contemporary situation involving religion, ethnicity, and national identity in an Asian context.”
— Pacific Affairs

“The strength of Myanmar’s enemy within lies in Wade’s attempt to understand and explain the complex ways in which discrimination has been perpetuated and entrenched, by looking at the human experience—on all sides—of this ongoing situation. . . . Excellent starting-points for those wanting to understand more about the situation of the Rohingya in Myanmar.”
— International Affairs

“Essential for all who wish to understand the ethnic cleansing that today threatens Myanmar’s Rohingya population and, with it, Myanmar’s tenuous path to democracy. Historically deep, balanced, large-spirited, and adorned with vivid and enlightening vignettes.”
— James C. Scott, Yale University, author of The Art of Not Being Governed: An Anarchist History of Upland Southeast Asia.

“Dotted with anecdotal recollections, the book brilliantly captures how individual lives are shaped, reshaped, and irrevocably damaged due to a real or acquired membership within a certain group. . . . An important work informing debates in these troubled times.?”
— Tea Circle