Levers of Power: How the 1% Rules and What the 99% Can Do About It (Paperback) 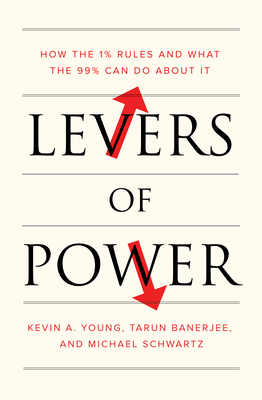 By Kevin A. Young, Tarun Banerjee, Michael Schwartz
$29.95
Not currently on the shelf, but we can order it, to pick up in store or have shipped from our remote warehouse.

It's no secret that "the 1%" - the business elite that commands the largest corporations and the connected network of public and private institutions- exercise enormous control over U.S. government. While this control is usually attributed to campaign donations and lobbying, Levers of Power argues that corporate power derives from control over the economic resources on which daily life depends. Government officials must constantly strive to keep capitalists happy, lest they go on "capital strike" - that is, refuse to invest in particular industries or locations, or move their holdings to other countries - and therefore impose material hardship on specific groups or the economy as a whole. For this reason, even politicians who are not dependent on corporations for their electoral success must fend off the interruption of corporate investment.

Levers of Power documents the pervasive power of corporations and other institutions with decision-making control over large pools of capital, particularly the Pentagon. It also shows that the most successful reform movements in recent U.S. history - for workers' rights, for civil rights, and against imperialist wars - succeeded by directly targeting the corporations and other institutional adversaries that initiated and benefitted from oppressive policies. Though most of today's social movements focus on elections and politicians, movements of the "99%" are most effective when they inflict direct costs on corporations and their allied institutions. This strategy is also more conducive to building a revolutionary mass movement that can replace current institutions with democratic alternatives.

Kevin A. Young is Associate Professor of History at the University of Massachusetts Amherst.

Tarun Banerjee is Assistant Professor of Sociology at the University of Pittsburgh.

“Young, Banerjee and Schwartz identify the importance of capital strikes in forcing government officials to provide the tax cuts, subsidies and regulatory cutbacks business demands. Focusing on key episodes during the Obama era, Levers of Power explains how capitalists really exert pressure on legislators and regulators and shows why popular forces accomplish more when they pressure capitalists with strikes, boycotts and demonstrations rather than targeting elected officials. This book is essential if we want to understand what tactics will be most effective in building mass power.”
—Richard Lachmann

“Levers of Power disrupts American democratic myths. Through rigorous research and penetrating analysis, Levers of Power dissects the power of elections, courts, Congress, politicians, presidents, lobbyists, social movements, and major corporations. It provides jarring and surprising conclusions of who really rules America; changes how we think about American centers of power; and which among them governs our lives. Everyone interested in democracy should read Levers of Power to become enlightened citizens.”
—Aldon Morris, author of The Scholar Denied

“Levers of Power is a powerful tool for activists and scholars alike, detailing how power remains in the hands of the 1% while also showing how elite institutions and structures can be undermined and even defeated, creating a world of, by, and for the 99%.”
—Marina Sitrin