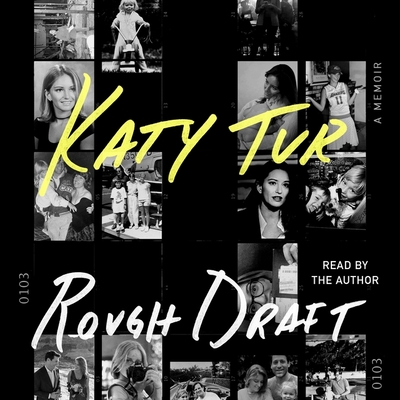 From MSNBC anchor and New York Times bestselling author Katy Tur, a sharp and candid memoir about a life spent chasing the news. Television journalism is the worst job on the planet like motherhood is the worst job on the planet. It's messy and often absurdly unpleasant and you're constantly being judged by strangers and, yes, there are other wonderful ways to lead your life. But I can't think of a richer way to spend mine. Before Katy Tur was an anchor on MSNBC, a bestselling author, and the wife of CBS This Morning's Tony Dokoupil (a.k.a. the guy with the good hair), she was just another young journalist reporting on hurricanes and holdups. Katy's passion for news began as a toddler when she would ride in her parents' helicopter as they reported on forest fires, Madonna's wedding, and, of course, O.J. Simpson. In Rough Draft, Tur reveals a life lived in TV news, from her beginnings as the daughter of groundbreaking helicopter journalists in Los Angeles, to being a storm chaser, to upstart Trump campaign reporter Little Katy, to national news anchor, and now, a mother of two. She opens up for the first time about her complicated relationship with her parents and she brings us behind the desk and behind the scenes to reveal what it was like to guide millions through the craziest era in news America has ever seen. Tur writes about unique and often funny milestones (the semi-glow of bestseller acclaim, the art of the teleprompter) and relatable rites of passage (impostor syndrome, a difficult maternity leave, a husband who insists on feeding the baby beans). She also reflects on the business of broadcast news, and her role in it during a time of massive chaos, disinformation, and extremism. More than a book about the news, Rough Draft is about rising to the moment, embracing the unexpected, and learning to write your own story.