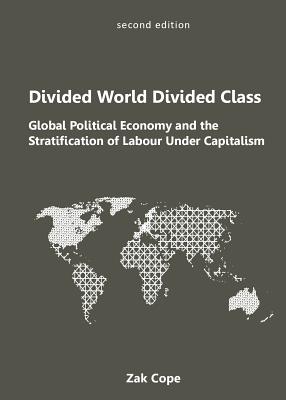 By Zak Cope
$24.95
Not currently on the shelf, but we can order it, to pick up in store or have shipped from our remote warehouse.

Divided World Divided Class charts the history of the 'labour aristocracy' in the capitalist world system, from its roots in colonialism to its birth and eventual maturation into a full-fledged middle class in the age of imperialism. It argues that pervasive national, racial and cultural chauvinism in the core capitalist countries is not primarily attributable to 'false class consciousness', ideological indoctrination or ignorance as much left and liberal thinking assumes. Rather, these and related forms of bigotry are concentrated expressions of the major social strata of the core capitalist nations' shared economic interest in the exploitation and repression of dependent nations.

The book demonstrates not only how redistribution of income derived from super-exploitation has allowed for the amelioration of class conflict in the wealthy capitalist countries, it also shows that the exorbitant 'super-wage' paid to workers there has meant the disappearance of a domestic vehicle for socialism, an exploited working class. Rather, in its place is a deeply conservative metropolitan workforce committed to maintaining, and even extending, its privileged position through imperialism.

This second edition includes new material such as data on growing inequality between the richest and poorest countries; data illustrating rising real wages in Imperial Britain; explication of the concepts of value, monopoly capital and unequal exchange and their ramifications for the global class structure;
discussion of social imperialism on the left; responses to critiques surrounding the thesis of mass embourgeoisement through imperialism; as well as further information on a range of subjects.