My Most Secret Desire (Hardcover) 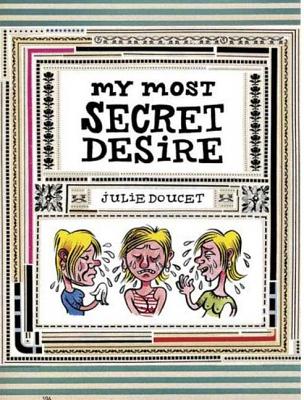 "One of the most promising of the younger graphic novelists." —Charles McGrath, The New York Times Magazine

Considered by many to be the most influential female cartoonist ever, Julie Doucet created an iconic body of work in the ten short years she solely devoted herself to her trailblazing comic-book series Dirty Plotte. Her comics are densely inked and detailed with a pulsating neurosis from a decidedly female point of view that set the comic-book world on its head when the series debuted. Doucet returns to comics after a five-year hiatus with a reworked edition of her dream journal My Most Secret Desire, complete with never-before-published material.

My Most Secret Desire is considered to be Doucet 's most innovative work, exploring the longings, pressures, and exploits of the feminine subconscious. Nightmarish tales of pregnancy, menstruation, sex changes, and boyfriends haunt Doucet's nocturnal psyche with a feverish and surreal pitch.

Julie Doucet was born near Montreal in 1965 and is best known for her frank, funny, and sometimes shocking comic book series Dirty Plotte, which changed the landscape of alternative cartooning. In the 1990s, Doucet moved between New York, Seattle, Berlin, and Montreal, publishing the graphic novels My New York Diary, Lift Your Leg, My Fish is Dead!, My Most Secret Desire, and The Madame Paul Affair in this time. In 2000, she quit comics to concentrate on other art forms; from these experiments emerged the collection of engravings and prints Long Time Relationship, and her one-year visual journal, 365 Days. Her post-comics artwork includes silkscreened artist's books, text-based collages, and animation films.