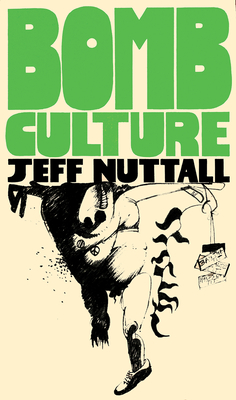 "Bomb Culture is an abscess that lances itself. An extreme book, unreasonable but not irrational. Abrasive, contemptuous, attitudinizing, ignorant and yet brilliant."
--Dennis Potter

Out of print for fifty years, Jeff Nuttall's Bomb Culture has achieved legendary status as a powerful, informative, and spirited exploration of 1960s alternative society and counterculture. Nuttall's confessional account of the period investigates the sources of its radical art, music, and protest movements as well as the beliefs, anxieties, and conceits of its key agitators, including his own.

Nuttall argued that a tangible psychic dread of nuclear holocaust pervaded both high and low cultures, determining their attitude and content, much as the horrors of World War I had nourished the tactics and aesthetics of Dadaism.

Accompanying the original text is a new foreword by author Iain Sinclair, who was closely acquainted with Jeff Nuttall and participated in the turbulent underground culture described in Bomb Culture. This anniversary edition is rounded out with an afterword by writer Maria Fusco and a contextual introduction by the book's editors which includes photographs and images of Nuttall's distinctive artwork as well as further archival materials.

Jeff Nuttall (8 July 1933-4 January 2004) was an English poet, publisher, actor, painter, sculptor, jazz trumpeter, anarchist sympathizer and social commentator who was a key part of the British 1960s counterculture. Douglas Field is Senior Lecturer in Twentieth-Century American Literature at the University of Manchester and a frequent contributor to the Times Literary Supplement. He is the author of All Those Strangers: The Art and Lives of James Baldwin. Jay Jeff Jones is a journalist, playwright, and magazine editor who has worked in San Francisco, London, British Columbia, and Manchester. He was a friend of Nuttall's and published his work in the literary quarterly New Yorkshire Writing. Iain Sinclair is the author of numerous books including American Smoke, Ghost Milk, London Orbital, Hackney That Rose-Red Empire, Lights Out For the Territory. I am a Reader at Edinburgh College of Art, University of Edinburgh and was Director of Art Writing at Goldsmiths, University of London. I am a Belfast-born writer based in Glasgow. I write fiction, critical and theoretical texts and edit publications and my work is published internationally and translated into ten languages, and I've been awarded as one of Canongate's Future 40 and am an Hawthornden Fellow.