The Tyranny of the Politically Correct: Totalitarianism in the Postmodern Age (Hardcover) 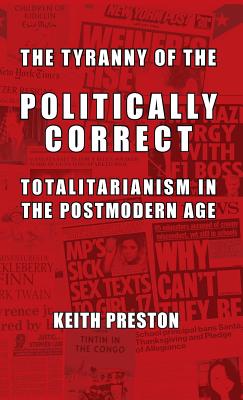 By Keith Preston
$24.00
Not currently on the shelf, but we can order it, to pick up in store or have shipped from our remote warehouse.

It is rare for anybody on the political "Left" to be critical of Political Correctness - it is after all a doctrine of their making - but in this book the anarchist Keith Preston is not only highly critical of the "PC" mindset, but he equates political correctness with the totalitarian regimes of Communist Russia and Nazi Germany. The banning of books, the intolerance of dissenters, and even show-trial by the media have all become part of the totalitarian regime that now dominates Western society.

Our Political representatives can sleep soundly for endorsing financially motivated wars, the creation of mass unemployment, the cutting of welfare payments, and even opposing tax increases on the rich - but they fear being attacked in the media for the "non-pc" aspects of their private lives. Publishing houses who established their reputation publishing the works of libertarians such as Thomas Paine, Murray Rothbard and Gustav Landauer, now warn their contemporary authors to omit all references in their work that can be seen to suggest any endorsement of cultural or social inequality for fear of offending the ever vigilant "pc" Stasi.

In "The Tyranny of the Politically Correct - Totalitarianism in the Postmodern Age" Keith Preston provides an analysis of how Political Correctness began, and how it has been embraced by not only the political left, but by global corporations in the furtherance of their mutual "One World - One People" agenda.