Relax Baby Be Cool: The Artistry and Audacity Of Serge Gainsbourg (Paperback) 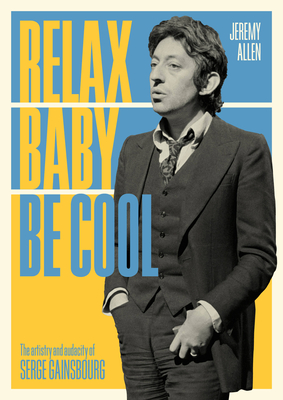 By Jeremy Allen
$22.95
Not currently on the shelf, but we can order it, to pick up in store or have shipped from our remote warehouse.

"Relax Baby Be Cool is a trip into unraveling the mind and genius of one of the greatest artists of all time. Although Gainsbourg’s music has been discovered by new generations, his life has rarely been illuminated and contextualized with such style and insight." - BECK

Why has Serge Gainsbourg crossed over to the English-speaking world when so many of his contemporaries have remained largely confined to the Francosphere? What is it about this unshaven provocateur that so appeals to us? And who was the real Serge Gainsbourg anyway? Was he the sensitive seducer and songwriting colossus of the 60s and 70s? Was he Lucien Ginsburg, the son of Russian Jewish refugees who had to wear a yellow star during the Nazi Occupation of Paris? Or was he Gainsbarre, the deplorable, attention-seeking drunk who shamelessly propositioned Whitney Houston on live TV?

Gainsbourg’s cult has only grown since his death in 1991, and Histoire de Melody Nelson is now regarded as a classic in France and internationally. The 1971 album had only sold eighty thousand copies by 1986 when it finally went gold fifteen years after its release; its canonical elevation is a remarkable story, and there are many more remarkable stories attached to all of Gainsbourg’s genre-defying, transgressive long-players. In Relax Baby Be Cool, writer Jeremy Allen takes each studio album in turn while exploring themes pertinent to Gainsbourg’s life and music: performance, provocation, theft, dandyism, avant-gardism, muses, Nazis, film and TV, Surrealism, vice, posterity, and fame.

Jeremy Allen is a well-known British music and culture journalist who has written for publications as various as the Guardian, the BBC, Vice, the Quietus, and Electronic Sound. He has interviewed legends like Lou Reed, Lemmy from Motörhead, and Amy Winehouse. He lived in Paris for five years until recently and specialises in writing about French pop. His recent essay on the nouvelle vague in the Repeater Books anthology We’ll Never Have Paris was described as ‘fascinating’ by the Times Literary Supplement.