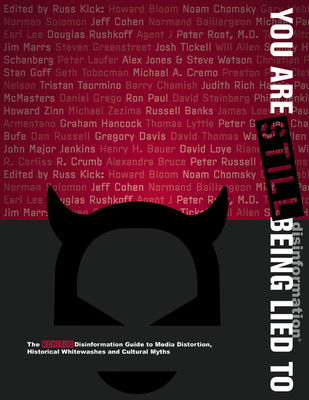 By Russ Kick (Editor)
$28.95
Not currently on the shelf, but we can order it, to pick up in store or have shipped from our remote warehouse.

A musthave revised and expanded edition of The Disinformation Company's classic anthology, You Are STILL Being Lied To contains more than a dozen allnew essays from contributors like Norman Solomon, Graham Hancock, Alex Jones, John Major Jenkins, Robert Bauval, Richard DeGrandpre, Alexandra Bruce, John Hogue, Gregory Davis, and Scott Creighton on topics ranging from the misleading marketing of antidepressants to the truth about the North American Union, from media consolidation to the New Thought movement.

Editor Russ Kick's massive collection acts as a battering ram against the distortions, myths, and outright lies that have been shoved down our throats by the government, the media, corporations, organized religion, the scientific establishment, and others who want to keep the truth from us.

An unprecedented group of researchers including Howard Zinn, Noam Chomsky, Howard Bloom, Sydney Schanberg, Michael Parenti, Riane Eisler, Jim Marrs, and many, many others--investigative reporters, political dissidents, academics, media watchdogs, scientistphilosophers, social critics, and rogue scholars--paints a picture of a world where crucial stories are ignored or actively suppressed and the official version of events has more holes in it than Swiss cheese. A world where real dangers are downplayed and nonexistent dangers are trumpeted. In short, a world where you are being lied to.

Russ Kick is the editor of the wildly successful three-volume anthology The Graphic Canon: The World's Great Literature as Comics and Visuals and the bestselling anthologies You Are Being Lied To, Everything You Know is Wrong, and 50 Things You're Not Supposed to Know . His books have sold over half a million copies. The New York Times has dubbed him "an information archaeologist," Details magazine described him as "a Renaissance man," and Utne Reader named him one of its "50 Visionaries Who Are Changing Your World." He is creator of the popular website www.thememoryhole.com.