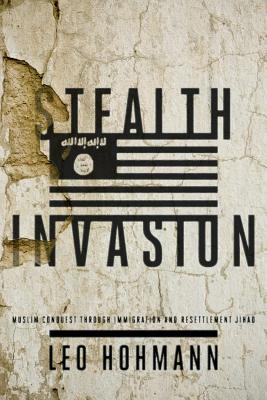 By Leo Hohmann
Email or call for price.
NOT AVAILABLE PLEASE DON'T ORDER

Americans are shocked by ongoing news reports chronicling growing chaos in Europe, where massive Muslim migration is wreaking havoc on the continent – including horrendous acts of mass terrorism, an epidemic of rape and sexual assault against European women, and large, jihadist-rich enclaves where even police are hesitant to enter.

Yet, few realize that America is heading down the same suicidal path.

As veran investigative journalist Leo Hohmann documents in Stealth Invasion: Muslim Conquest through Immigration and Resettlement Jihad, an international network of mostly Muslim Brotherhood-linked activists has been building its ranks within the United States for more than three decades, aided by a U.S. immigration system seemingly obsessed with welcoming as many unassimilable migrants with anti-Western values as possible. As a result, largely secret plans for major population changes in hundreds of U.S. cities and towns are already being implemented.

This transformation is taking place not only in gateway cities like New York, Chicago and Los Angeles, but in such all-American towns as Twin Falls, Idaho, and St. Cloud, Minnesota, where tensions brought on by the importation of hostile cultures are already causing shock waves.

As Stealth Invasion reveals, the Muslim Brotherhood has a well-defined strategy for conquering America, not necessarily with violent jihadist attacks – although we should expect those to increase – but through more subtle means collectively called "civilization jihad."

According to the Brotherhood's own documents seized by the FBI, "civilization jihad" involves infiltrating and conquering Western democracies from within. The goal is to partner with leftist and anarchist groups (such as "Black Lives Matter") to tear at the fabric of Western civilization and the Judeo-Christian values that undergird it. Their intent is to use liberal immigration laws to create "settlements" for Islam in America, which in turn become enclaves of non-assimilated Muslims who can easily become "radicalized" by a preacher at a local mosque, or by watching a Youtube video posted by an imam in Pakistan.

Very simply, civilization jihad calls for changing a nation by changing its people and its values – gradually, over time.

Meanwhile, the world is undergoing a historic shift of populations – out of the Middle East and Africa, and into Europe, Canada and the United States. The fact that the majority of those coming to America as part of this new immigration wave bring a hostile value system based on sharia law, and have little interest in assimilating into American culture, seems of no concern to our leaders in the White House and Congress.

Indeed, refugee resettlement and expanded visa programs have enjoyed the full support of both major parties. Instead of learning the lessons of 9/11 and tightening up America's immigration system, our leaders have expanded it wildly and recklessly.

Stealth Invasion connects the dots between the problems of growing violence and unrest that have plagued Europe and what is now unfolding across America. The terror attacks on Chattanooga, Orlando, San Bernardino, St. Cloud, Minnesota, and the Chelsea area of Manhattan were all carried out by Muslim immigrants, or, in the case of San Bernardino and Orlando, by sons of Muslim immigrants. A surprising number of foiled attacks have also been plotted since 9/11 by Muslim refugees and immigrants.

Stealth Invasion blows the lid off a corrupt, fraudulent program that has been secretly dumping Third World refugees, many of them radical, on American cities for three decades. Readers will meet the people and groups behind this shadowy resettlement network, which starts at the United Nations and includes the White House, the U.S. State Department, some surprising church groups, and corporate honchos involved in everything from investment banking and meatpacking, to Florida vacations and yogurt manufacturing.

Americans have been kept largely in the dark about the radical plans to permanently transform their nation. Until now.

In Stealth Invasion,Leo Hohmann reveals how Congress has turned a blind eye to the program since President Jimmy Carter signed into law the Refugee Act of 1980, allowing the United Nations – not American officials – to select the refugees sent to our cities. As a result, those selected are increasingly coming from hotbeds of Sunni radicalism like Syria, Iraq, and Somalia while a growing population of persecuted Christians are left behind.

The government uses a network of private agencies, most with churchy names tied to Lutherans, Catholics, Episcopalians, Jews and even evangelicals, to do the resettlement work, but the public is shut out of the process from beginning to end. No public hearings, no public notices in the local newspaper asking for their input.

Stealth Invasion uncovers how various cities have become refugee hotspots and examines grassroots uprisings where citizens have challenged this secret cabal and won. Armed with knowledge of the government’s methods for dealing with local resettlement backlash, Hohmann provides details on how concerned Americans can most effectively respond.

The great "melting pot" that once typified the success of America's immigration system no longer seems to be working. The old shared values of God, country, family, and freedom that used to hold the country together are breaking down.

In Stealth Invasion, Leo Hohmann shows that the breakdown is no coincidence and it hasn't manifested overnight. It's been brewing since the 1980s, but is now reaching the point where it is about to metastasize and overtake us all – unless it is stopped now.

Leo Hohmann is a veteran journalist and news editor for online news giant WND, with a particular focus on immigration and Islam. Prior to joining WND, he worked more than two decades as a newspaper reporter and editor in suburban Atlanta and in Charlotte and Raleigh, North Carolina.

"The poison fruit of the Left's treasonous migrant policy has not yet fully become obvious, but it soon will. They are importing huge numbers of people who do not share American values and have no interest in adopting them. When we see an epidemic of jihad terror attacks, FGM, honor killing, and demands for Sharia accommodation in this country, you will know why if you read Leo Hohmann's essential book.,Stealth Invasion tells the truth that the mainstream media is determined to cover up: that the Muslim migrants are not "refugees," but hostile invaders." — Pamela Geller, president American Freedom Defense Initiative and author of Stop the Islamization of America

"The poison fruit of the Left's treasonous migrant policy has not yet fully become obvious, but it soon will. They are importing huge numbers of people who do not share American values and have no interest in adopting them. When we see an epidemic of jihad terror attacks, FGM, honor killing, and demands for Sharia accommodation in this country, you will know why if you read Leo Hohmann's essential book.,Stealth Invasion tells the truth that the mainstream media is determined to cover up: that the Muslim migrants are not "refugees," but hostile invaders." — Pamela Geller, president American Freedom Defense Initiative and author of Stop the Islamization of America

"The ‘refugee’ influx is not a humanitarian crisis as it has been portrayed, but an opportunity for the Left to engage in social engineering on a massive scale, while flooding Western Europe and the U.S. with jihadis who easily infiltrate among peaceful refugees, just as the Islamic State has long threatened it would do. We are being lied to by the political and media elites about what is really going on, but here is the truth: in this shocking and sobering book, the peerless investigative journalist Leo Hohmann lays out the facts with devastating clarity, documenting a betrayal so immense as to be unbelievable, were the information in this book not so ineluctably compelling. Stealth Invasion ought to be required reading for any politician who still cares about defending America and Judeo-Christian civilization; because of what is laid out in this book, it is rapidly becoming too late." — Robert Spencer, author of the New York Times Bestsellers The Politically Incorrect Guide to Islam (and the Crusades) and The Truth About Muhammad