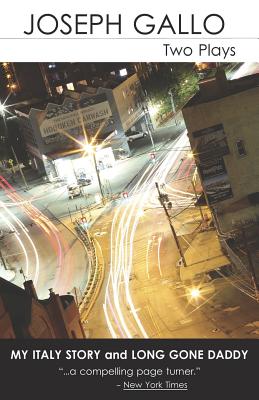 MY ITALY STORY - Spurred by visits from his grandmother's ghost and by pleas from his cousin Louie to help get the family back together, Thomas DaGato quits his job as a New York account executive, and travels to the tiny Italian village of his ancestors - Vallata. It's not until he comes home, however, that he discovers a secret that unlocks his past. MY ITALY STORY originally opened Off-Broadway at the 47th Street Theatre, and was nominated for the Gay Talese Literary Prize. LONG GONE DADDY is the follow-up to Gallo's critically acclaimed Off-Broadway solo play My Italy Story ("...a compelling page turner."- New York Times). Checking-in with his alter-ego, Thomas DaGato - LONG GONE DADDY chronicles the comic misadventures of becoming a stay-at-home father. From Bruce Springsteen concerts to OBGYN appointments to the Hoboken playgrounds and back again, Gallo's semi-autobiographical play also wrestles with the memory of his own Dad, a former fireman, and the existential question, "When does a father earn the right to be called Dad?

JOSEPH GALLO is the playwright-in-residence at Mile Square Theatre where he developed Long Gone Daddy, which was originally produced in a Salon Tour of homes around Hoboken, NJ. Prior work at MST includes the workshop of his play Two-Man Kidnapping Rule, which was later produced in New York City at the New Ohio Theatre, and published in Smith & Kraus's anthology 2012 Best Men's Stage Monologues and Scenes. Other MST productions include: Ya Gotta Believe! - in the 5th Annual 7th Inning Stretch; and the extended run of My Italy Story, starring two-time Emmy Award-winner Tom Pelphrey, which transferred to Rutgers University, and later played at the Barrow Street Theatre in New York. His producing credits at MST include: the 11th Annual 7th Inning Stretch; It's A Wonderful Life; A Year with Frog and Toad; and the dance/theatre installation Much Ado About Cucumbers & Cigars, where he additionally served as dramaturg, and director of the filmed version of the performance. He also directed Edith Freni's Flare for the 11th Annual Stretch, which was named one of The Best American Short Plays of 2013, and is published by Applause Books. As a solo writer/performer he appeared in the original production of My Italy Story at Penguin Rep, which later had its debut Off-Broadway at the 47th Street Theatre in New York, starring Danny Mastrogiorgio ("...a compelling page turner." - New York Times). Other solo shows include Whizzy and The Jealousy Piece, both of which premiered in the American Living Room festival at HERE. He is also a frequent participant at The Moth in New York City where he is a StorySLAM champion. He currently serves as Coordinator of Theatre and Film at Hudson County Community College, where he founded and developed the college's Liberal Arts: Theatre Arts - Associate in the Arts program. Most recently he was named the 2016 recipient of the Lincoln Center Prize for Innovative Teaching in Theatre. Training: MFA in Playwriting, Ohio University.