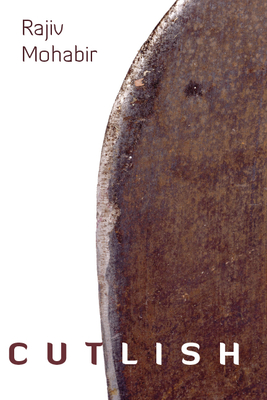 In Cutlish, a title referencing the rural recasting of the cutlass or machete, Rajiv Mohabir creates a form migrated from Caribbean chutney music in order to verse the precarity of a queer Indo-Caribbean speaker in the newest context of the United States. By joining the disparate threads of his fading, often derided, multilingual Guyanese Creole and Guyanese Bhojpuri linguistic inheritances, Mohabir mingles the ghosts that haunt from the cane fields his ancestors worked with the canonical colonial education of his elders, creating a new syncretic American poetry — pushing through the “post” of postcolonial, the “poet” in the poetic.

Rajiv Mohabir, an immigrant to the United States, is the author of The Cowherd ’s Son (Tupelo Press 2017, winner of the 2015 Kundiman Prize; Eric Hoffer Honorable Mention 2018) and The Taxidermist’s Cut (Four Way Books 2016, winner of the Four Way Books Intro to Poetry Prize, Finalist for the Lambda Literary Award for Gay Poetry in 2017), and translator of I Even Regret Night: Holi Songs of Demerara (1916) (Kaya Press 2019) which received a PEN/Heim Translation Fund Grant Award. His memoir Antiman received Reckless Books’ New Immigrant Writing Prize and is forthcoming 2021. He received his PhD in English from the University of Hawai‘i, Mānoa and his MFA in Poetry from Queens College, CUNY. Currently he is an Assistant Professor of poetry in the MFA program at Emerson College. He lives in the Boston area.

“Rajiv Mohabir’s Cutlish uses history to interrogate the word ‘home’ and all that it might mean to those who thrive in spite of homophobia, stereotype, and xenophobia. These poems are grounded in definite time and space in a voice that refuses to be silenced, ‘They are vexed you survive; that you / rise up from the pavement...’ But what I love most is to read a poet as disciplined and committed as Mohabir as he transforms and reinvents himself in tone, in subject, and in line: ‘Let’s get one thing queer—I’m no Sabu-like sidekick, / I’m the main drag. Ram Ram in a sari; salaam // on the street. I don’t speak Hindu, Paki, or Indian, / can’t control minds, have no psychic powers.’”

“Cutlish, Rajiv Mohabir’s stunning new collection, asks urgent questions about queer identities, diaspora and silence. Deeply grounded in 1838, the year the first ships brought indentured servants from India to Guyana, Cutlish reckons with the relationship between language and violence. These poems challenge the colonizer’s English through Creole, Sanskrit, Hindi, Hindustani and Chutney songs, dazzling us at every turn: ‘May each face who ever said, Speak English / find their own tongue fettered and split, / my mixed blood blackening their faces.’ The book’s title evokes the violence of a cutlass, and everywhere here we see language as knife and blade but also as solace. Cutlish is a luminous, beautiful book. Rajiv Mohabir is one of the most important poets writing today.”

“Rajiv Mohabir’s polyglottal collection will reward you with its formal boldness and gorgeous intimacy. I didn’t know that I came to contemporary poetry to find the end of English, until I read Cutlish. Here, Mohabir leads us enthusiastically to the edges of language—torn, improvised, as well as deftly carved—where music and meaning are visually and sonically sumptuous. This is a stunning book.”
—Patrick Rosal