Axis of Resistance: Towards an Independent Middle East (Paperback) 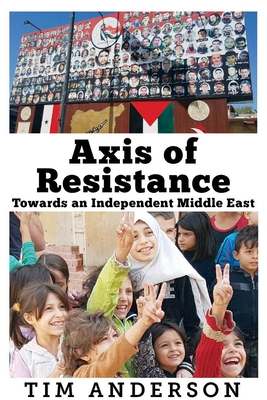 By Tim Anderson
Email or call for price.
NOT AVAILABLE PLEASE DON'T ORDER

In the series of 21st century wars initiated by Washington in the name of a 'New Middle East', resistance forces are prevailing. Like all imperial gambits before it the US-led plan has been to subjugate the entire region - whether through the direct application of force, or through coalitions or proxies - to secure privileged access to its tremendous resources and then dictate terms of access to all other players. Insofar as the key to a definitive defeat of Washington's ambitions lies in regional integration of the resistance forces-an integration led by Iran, the undisputed leader of an 'Axis of Resistance' to foreign domination and Zionist expansion--Iran has emerged as an ever more central target for regime change. This book, Axis of Resistance: towards an independent Middle East, follows the author's 2016 book The Dirty War on Syria. It examines the end of the war on Syria and the wider elements of the regional conflict, in particular the prospects for a democratic Palestine, the character of the Resistance and the role of Iran. It draws attention to these broad leitmotifs underpinning each particular history that are key to understanding both the parts and the whole: A single, essentially colonial impetus drives each particular US aggression from Libya to Afghanistan. These hybrid wars utilize propaganda offensives, economic siege warfare, terrorist proxies, direct invasions and military occupations followed by repression via client states. The aim is to keep resistance forces fragmented. Just as each aggression forms part of a broader Washington strategy, similarly the integration of the resistance in particular remains critical to its success. The Resistance has a common character but no idealized personality or ideology. However the common features are a demand for popular self-determination and for accountable social structures that serve broad social interests. Axis addresses myths about the wars and the resistance, while attempting a partial and provisional history of the conflicts. A focus on resistance can help us understand the defeat of great powers, something not possible for any analysis which begins and ends with power.