The World as I See It (Compact Disc) 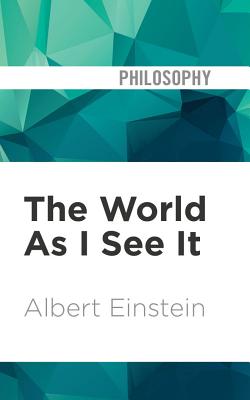 By Albert Einstein, Neil Berger (With), Henry Leyva (Read by)
Email or call for price.
NOT AVAILABLE PLEASE DON'T ORDER

A fascinating collection of Einstein's observations about life, religion, nationalism, and a host of personal topics that engaged the genius' intellect

In the aftermath of the First World War, Einstein writes about his hopes for the League of Nations, his feelings as a German citizen about the growing anti-Semitism and nationalism of his country, and his myriad opinions about the current affairs of his day. In addition to these political perspectives, The World as I See It reveals the idealistic, spiritual, and witty side of this great intellectual as he approaches topics including "Good and Evil", "Religion and Science", "Active Pacifism", "Christianity and Judaism", and "Minorities".

Including letters, speeches, articles, and essays written before 1935, this collection offers a complete portrait of Einstein as a humanitarian and as a human being trying to make sense of the changing world around him. This authorized Philosophical Library audiobook features a new introduction by Neil Berger.

"Without the sense of fellowship with men of like mind, of preoccupation with the objective, the eternally unattainable in the field of art and scientific research, life would have seemed to me empty." (Albert Einstein, "Forum and Century")

"Preceding generations have presented us, in a highly developed science and mechanical knowledge, with a most valuable gift which carries with it possibilities of making our life free and beautiful such as no previous generation has enjoyed. But this gift also brings with it dangers to our existence as great as any that have ever threatened it." (Albert Einstein, Address to the Students' Disarmament Meeting)

Albert Einstein (1879 - 1955) was born in Germany and became an American citizen in 1940. A world-famous theoretical physicist, he was awarded the 1921 Nobel Prize for Physics and is renowned for his Theory of Relativity. In addition to his scientific work, Einstein was an influential humanist who spoke widely about politics, ethics, and social causes. After leaving Europe, Einstein taught at Princeton University. His theories were instrumental in shaping the atomic age.

Neil Berger, an associate professor emeritus of mathematics, taught at the University of Illinois at Chicago in the Mathematics, Statistics, and Computer Science department from 1968 until his retirement in 2001. He was the recipient of the first Monroe H. Martin Prize (1975), which is now awarded by the University of Maryland every five years for a singly authored outstanding applied mathematics research paper. He has published numerous papers and reviews in his fields of expertise, which include elasticity, tensor analysis, scattering theory, and fluid mechanics.