Maps of Our Spectacular Bodies (Paperback) 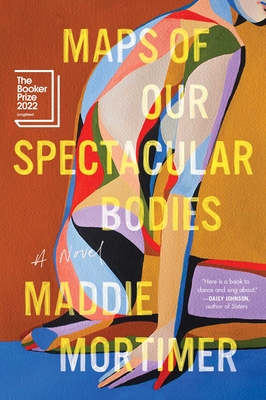 Longlisted for the International Booker Prize

This lyrical debut novel is at once a passionate coming-of-age story, a meditation on illness and death, and a kaleidoscopic journey through one woman’s life—told in part by the malevolent voice of her disease.

Lia, her husband Harry, and their beloved daughter, Iris, are a precisely balanced family of three. With Iris struggling to navigate the social tightrope of early adolescence, their tender home is a much-needed refuge. But when a sudden diagnosis threatens to derail each of their lives, the secrets of Lia’s past come rushing into the present, and the world around them begins to transform.

Deftly guided through time, we discover the people who shaped Lia’s youth; from her deeply religious mother to her troubled first love. In turn, each will take their place in the shifting landscape of Lia’s body; at the center of which dances a gleeful narrator, learning her life from the inside, growing more emboldened by the day.

Pivoting between the domestic and the epic, the comic and the heart-breaking, this astonishing novel unearths the darkness and levity of one woman’s life to symphonic effect.

Maddie Mortimer was born in 1996. She received her BA in English literature from the University of Bristol. She lives in London, where she works as a screenwriter and an author. Maps of Our Spectacular Bodies is her first novel.

"This striking novel takes a formally inventive approach to a woman’s terminal-cancer diagnosis... Sadness is not allowed to crowd out wit and joy, and Mortimer asks readers to think about death as something that 'does not happen in the first or third person, but in the second.'"—The New Yorker

"This is a touching, eye-opening perspective on life and illness like you've never read before."—Good Housekeeping

"Ambitious... Maps of Our Spectacular Bodies sets its own terms."—The Guardian

"English novelist Mortimer's debut novel is a poetic story of a woman and the cancer that consumes her body... Using word placement, font, and shape to create images on the page, Mortimer deepens the reader’s engagement with the story and characters ... Through breathtaking attention to detail, Mortimer crafts a stunning novel that touches on the expanses one life can contain."—Booklist (starred)

"Maddie Mortimer's dazzling debut novel about a woman with breast cancer is a life-affirming read - all the more so because of its proximity to death... While there are many books that explore these themes, it is rare to find one that does so in such an immersive and harrowing way."—The Straits Times

"An exquisitely devastating novel by a major talent. Maddie Mortimer is not only an accomplished cartographer of our bodies but also an unparalleled chronicler of how we inhabit them—and how they can be besieged, conquered, and reclaimed throughout our lives. With formal audacity and emotional elegance, Maps of Our Spectacular Bodies shows family bonds reshaping across generations to reveal, ultimately, how love and beauty reside in finitude."—Hernan Diaz, author of Trust

"Both expansive and intimate, Maps of Our Spectacular Bodies is an intricate portrait of a life hurtling towards the inevitable. An extraordinary debut."—Kiran Millwood Hargrave, author of The Mercies

"Here is a book to dance and sing about. An extraordinary, kaleidoscopic dive into language."—Daisy Johnson, author of Sisters

"An original and memorable novel written in shimmering prose. The characters stayed with me long after I’d finished reading."—Sarah Moss, author of Summerwater

"Maps of Our Spectacular Bodies is a beautiful novel about death that feels completely alive, pulsing with tenderness and wit." —Megan Hunter, author of The End We Start From

"An extraordinary debut, unlike anything I've read. Wildly inventive, poetic and poignant, this is a rare gem of a novel that took my imagination to new places and touched my heart."—Emma Stonex, Sunday Times bestselling author of The Lamplighters