LEP - The Lord of the Collider Rings at CERN 1980-2000: The Making, Operation and Legacy of the World's Largest Scientific Instrument (Hardcover) 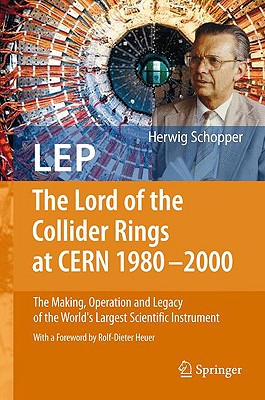 Housed by a 4 m diameter tunnel of 27 km circumference, with huge underground labs and numerous surface facilities, and set up with a precision of 0.1 mm per kilometer, the Large Electron-Positron Collider (LEP) was not only the largest but also one of the most sophisticated scientific research instruments ever created by Man. Located at CERN, near Geneva, LEP was built during the years 1983 - 1989, was operational until 2000, and corroborated the standard model of particle physics through continuous high precision measurements.

The Author, director-general of CERN during the crucial period of the construction of LEP, recounts vividly the convoluted decision-making and technical implementation processes - the tunnel alone being a highly challenging geo- and civil engineering project - and the subsequent extremely fruitful period of scientific research. Finally he describes the difficult decision to close down LEP, at a time when the discovery of the Higgs boson seemed within reach.

LEP was eventually dismantled in 2000, enabling the tunnel to be reused for building the next generation machine, the much more powerful Large Hadron Collider (LHC), an upgrade then called LEP3 and foreseen from the beginning. It became operational just as this account was being completed.

Written by the main protagonist responsible for making LEP a reality, this is the definitive inside story of a remarkable machine and the many thousands of scientists and engineers from around the world, whose efforts contributed to the new knowledge it produced.