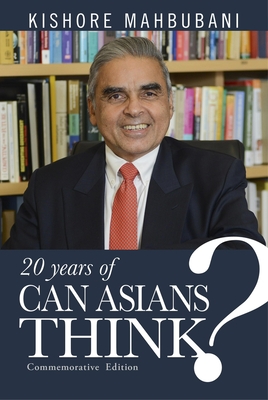 By Kishore Mahbubani
Email or call for price.
Out of Print

Can Asians think? Is Western civilization universal? Does the West promote human rights for altruistic reasons? These are some questions Kishore Mahbubani has sought to answer in this volume of essays written over the past decade. Contrary to the prevailing view in the West that the 500-year dominance of Western civilization points to it being the only universal civilization, Can Asians Think? argues that other civilizations may yet make equal contributions to the development and growth of mankind. Hailed as “an Asian Toynbee” and “the Max Weber of the new Confucian ethic”, Mahbubani continues to illuminate his central arguments with new essays in this fourth edition.

Kishore Mahbubani is the Dean and Professor in the Practice of Public Policy at the Lee Kuan Yew School of Public Policy (LKYSPP) of the National University of Singapore. He continues to serve in the boards and councils of several institutions in Singapore, Asia, Europe and North America.His articles have appeared in a wide range of journals and newspapers, including The Washington Quarterly, Survival, American Interest, the National Interest, the Wilson Quarterly, Time, Newsweek and New York Times. He is also the author of Beyond The Age of Innocence: Rebuilding Trust between America and the World (published in New York) and The New Asian Hemisphere: the irresistible shift of global power to the East. More information on his writings can be found on www.mahbubani.net.