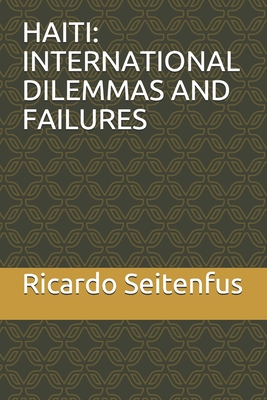 By Jr. Fatton, Robert (Foreword by), Fernando Gabeira (Foreword by), Ricardo Seitenfus
$45.00
Not currently on the shelf, but we can order it, to pick up in store or have shipped from our remote warehouse.

Ricardo Seitenfus' Haiti: International Dilemmas and Failures is an important and fascinating book. Seitenfus, a Brazilian academic, was the Special Envoy of the Organization of American States (OAS) to Haiti from 2008 to 2011-a critical period of the country's recent history. He arrived in Port-au-Prince in the aftermath of a series of major political crises that began with the forced departure of then President Aristide in 2004.Seitenfus gives us a most informed, astute, and vivid account of 2010, which he aptly defines as "Haiti's annus horriblis." In fact, his role as the Special Envoy of the OAS to Haiti gave him an insider understanding of the role of the international community in the political economy of Haiti. In addition, he came to know well the Haitian political class, befriending President Preval and Prime Minister Bellerive among others. Clearly, Seitenfus developed a great understanding of the rather byzantine world of Haitian politics. Moreover, he had access to critical information concerning the goals and strategies of the key members of the international community; he participated also in confidential meetings between international and Haitian authorities. He was both observer and participant in the most important forums and organizations that attempted to frame Haiti's complicated and difficult economic and political reconstruction. Seitenfus verdict is clear: the international community failed Haiti. Not only did foreign powers misunderstood the country and portrayed it as more violent than it really was, but their policies weakened an already weak state and privileged foreign NGOs that were ill equipped to deal with Haiti's problems. In other words, foreign assistance ignored Haitian preferences and knowledge, and imposed its own preconceived notions of what the country needed. The result is the transformation of Haiti into a dysfunctional "de facto protectorate under United Nations tutelage." After supporting Preval as the indispensable President of Haiti, the United States and France grew increasingly antagonistic to him and were bent on preventing the election of Preval's handpicked successor, Jude Celestin. In fact, Seitenfus reveals that this antagonism reached the point where the Core Group led by Mulet attempted to remove Preval from office and send him into exile. Had it not been for the intervention of Seitenfus himself, Preval might well have had in Mulet's words "to leave the presidency and abandon Haiti." While the Core group failed to carry this gross and illegal coup, it nonetheless succeeded in creating a process that changed the results of the first round of the presidential elections and opened the way to Martelly's election in the second round. Seitenfus' explosive revelations are of great significance and deserve to be known by a wide audience. In conclusion, Seitenfus has written a provocative and most persuasive and detailed account of the travail of the foreign occupation of Haiti. It will attract a wide audience; "Haitianists," academics and professionals studying international relations, humanitarian interventions, the Caribbean, Latin America, and the UN will be interested in Haiti: International Dilemmas and Failures. The translation is excellent. Seitenfus is not only critical of the foreign community; he has harsh words for the behavior of Haiti's venal political class and predatory elite.Let me reiterate that I believe that Seitenfus has written an important and critical book that will become a must read for anyone interested in Haiti, development, and humanitarian interventions. Seitenfus' book, and I am convinced after rereading it this time in English that it will be a major reference in Haitianist circles for a long time to come. This manuscript, which is an eloquent challenge to the prevailing system of foreign assistance and imperial interference. It is the work of a brave man and real humanist. Robert Fatton Jr.